How Many Trees Cut Down Each Year or in 2021? The Deforestation Crisis Explained

If you’ve ever wondered how many trees are cut down every year, the shockingly short answer is that 15 billion trees are lost annually to deforestation.5

While that number is staggering, it can be hard to visualize.

This image makes it a little easier to grasp… 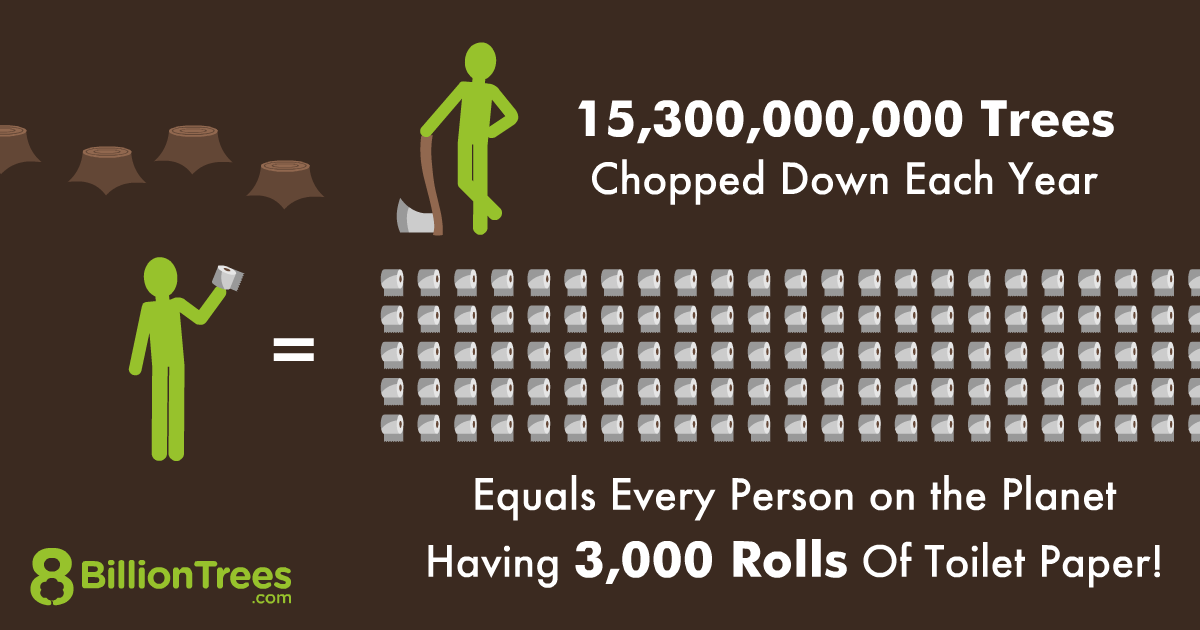 For the 15 billion trees that are chopped down each year, every person on the planet could have 3,000 rolls of toilet paper.

If you imagine 3,000 rolls of toilet paper sitting in your bathroom, they likely wouldn’t all fit. Now imagine how many trees just those 3,000 rolls equate to, and the amount of deforestation it represents.

Without those trees, many endangered animals become more vulnerable and others are forced to find new homes. Plus, the atmosphere is stuck with higher levels of greenhouse gases that would have otherwise been stored by those trees (as a carbon sink). Sadly, many people are unaware of both the causes of deforestation and the impact it is having on our planet.

And if people don’t know about it, how can we stop it?

Why Do People Cut Down Trees? (Hint: It’s Not Paper)

There are a variety of reasons why people cut down so many trees… but here’s a spoiler – paper production is not one of the major causes. Sure, some things like toilet paper and paper goods (plates, paper towels, and paper itself) create a heavy toll on our worldly woodlands, but there are other, far more damaging actions that are destroying the Earth’s forests.

How Many Acres of Trees Are Cut Down Each Year? 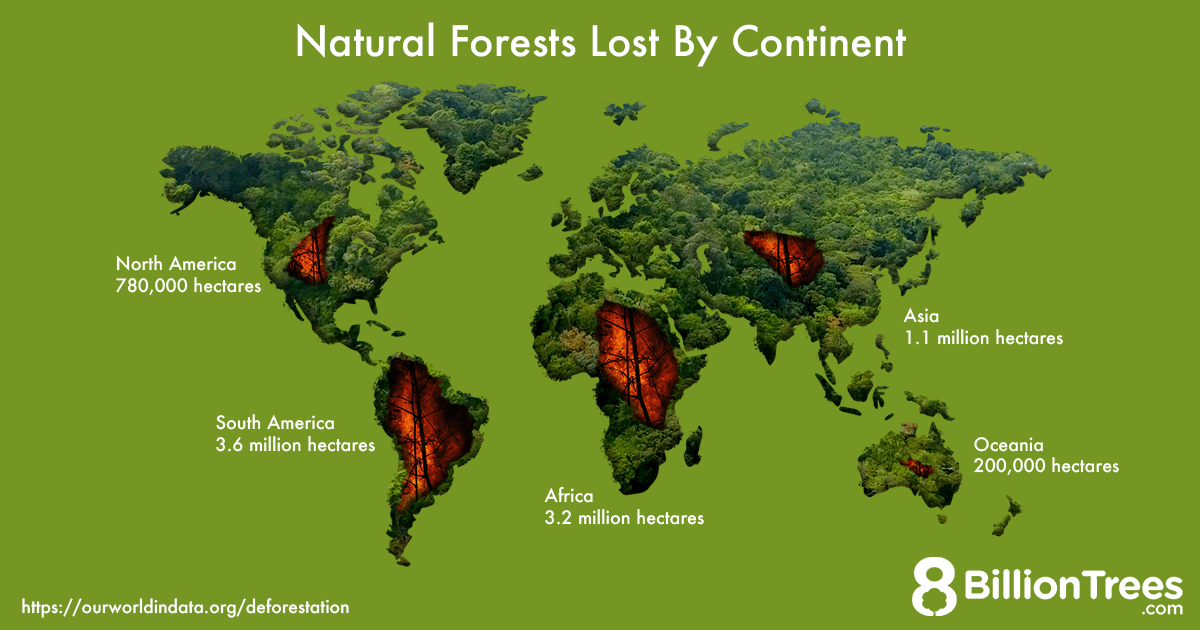 Natural forests lost by continent9 include:

What’s the Definition of Deforestation?

In plain English, it’s when people cut down or remove forests for whatever reason.

What Are the Five Main Causes of Deforestation?

There are specific causes that spur the destruction of forests, and when combined, the damaging impact on the planet is multiplied. The following causes are the top five. 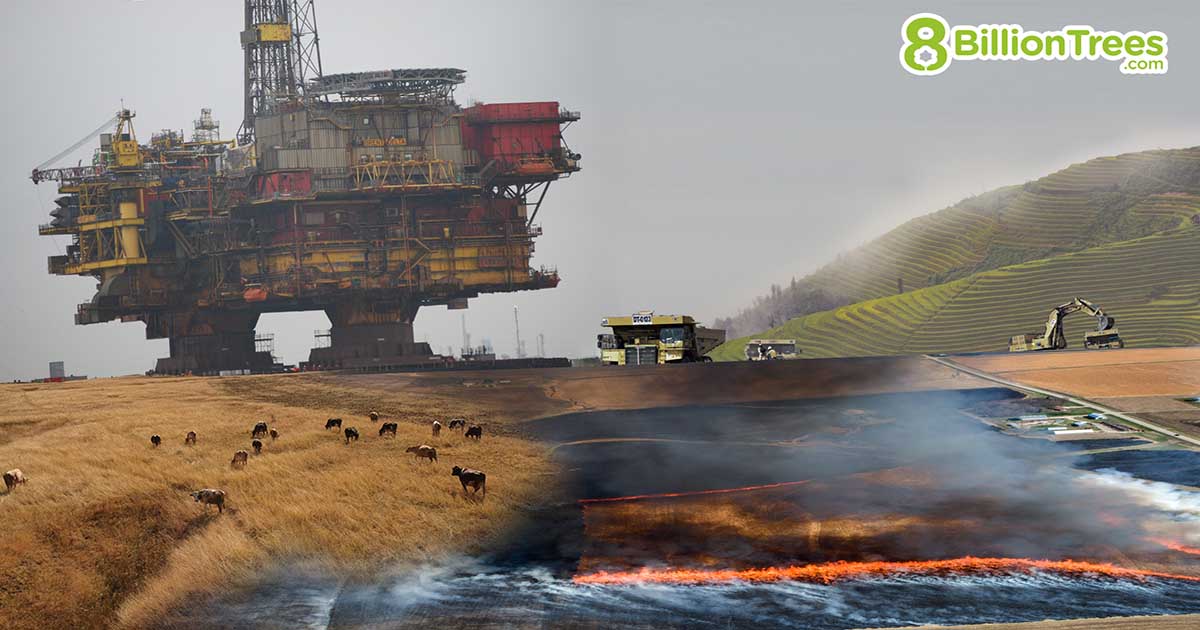 Of course, many people understand that food production is essential, they also argue that there must be ways of balancing the need for thriving forests along with meeting the nutritional needs of people around the world. And, we agree.

Deforestation Cause #2: Grazing and Feeding Livestock

A lot of deforestation is caused by the need for farmland, much of which is used to grow soy. Over 67% of soy is fed to animals, primarily poultry and pigs.35

Soy, palm oil, and cattle ranching are the most significant contributors to agricultural deforestation.31

Mining and drilling account for about 7% of all deforestation.32

Even when mining doesn’t directly lead to deforestation, the process of extracting resources from the earth often leads to large amounts of pollution. Unfortunately, some studies have shown that over 25% of metal mines worldwide can be found within 10km of a protected area.

For example, 15% of the Amazon is covered by active or planned oil concessions and 8% is covered by mineral concessions.32 This is why 8 Billion Trees is working so hard to fight to rebuild these areas that have been cleared (or are scheduled for clearing).

Mining suffers from the same issues as drilling – it causes deforestation both through the direct clearing of forests and through pollution and industrial accidents.

It can also be prone to ecological disasters such as the infamous 2019 iron mining disaster in Brumadinho, Brazil. There are about 400 iron mines of the same type in the Brazilian state of Minas Gerais, and the Brumadinho disaster occurred just three years after a similar disaster just 75 miles (120km) away.15

Some of these issues could be solved with improved safety and environmental measures, but establishing a unified set of goals and restrictions throughout the world is highly problematic, given that not all nations would follow them.

Therefore, finding ways to work with individual governments is the key. By making an effort to stop ecological destruction, one region at a time, humans can actually do something about the problem, instead of waiting around and just talking about potential solutions.

Wildfires are the cause of nearly one-quarter of all deforestation,25 including about half in North America.25 According to the US government, 2.2 million hectares burned this year in California alone with another 800,000 hectares destroyed in the northwestern U.S. – and many of those fires are still burning as of this publication.18 In fact, according to the UN,19 arctic fires in June and July of 2019 released a total of 129 megatons of CO2 resulting in a cloud of soot larger than the European Union.

Needless to say, this form of deforestation has Global Warming implications. The fires that ravaged Australia over the past two years have led to serious and dangerous ecological threats. 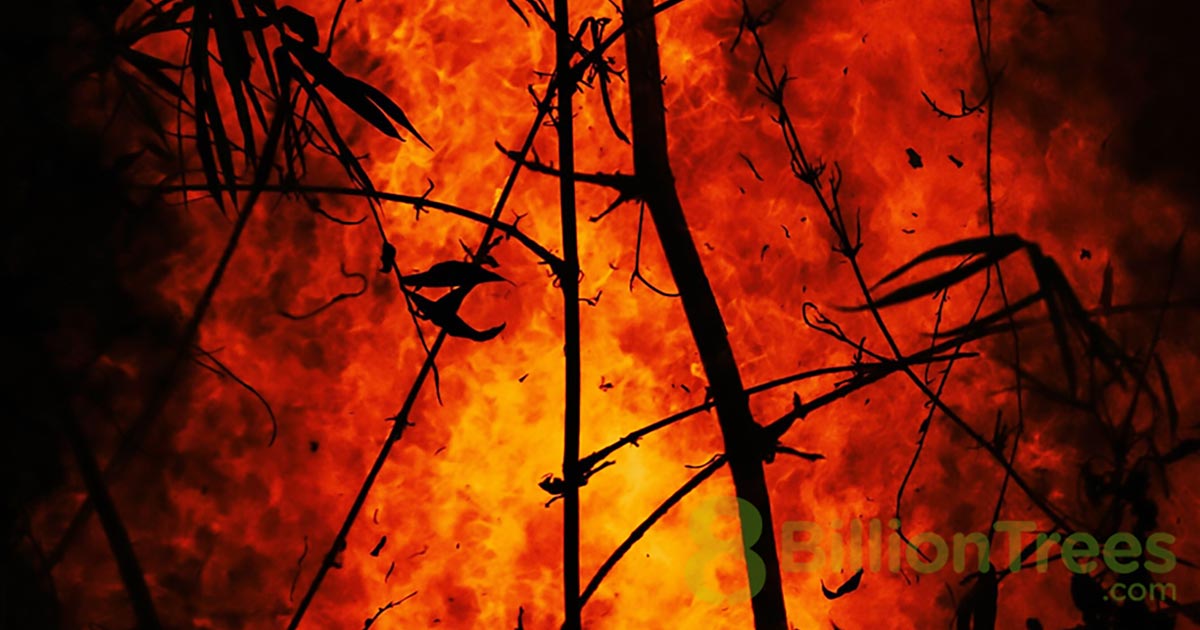 Other Reasons for Cutting Trees Down

In addition to the five main causes of deforestation, there are other, lesser-known reasons that so many trees are cut down.

Palm oil is the highest-yield, least expensive form of vegetable oil.29 Because its range is limited to the tropics, much of its market popularity has come at the expense of tropical rainforests. In fact, 90% of palm oil is produced in Malaysia and Indonesia,33 yet these are the only ecosystems that support the orangutan. Only about 2% of global palm oil production is considered sustainable. Palm oil is also used to produce biodiesel.31

Urbanization, complete with sprawling and booming populations, is another indirect cause of deforestation. While not a major cause of deforestation, urbanization is noteworthy for several reasons. First, roads and urban development can fragment forests so that they’re no longer continuous. While this may seem harmless at a glance, fragmentation and edge effects can have a devastating impact on wildlife.16 With a growing population, cities must expand, so more land is being used for agriculture and livestock to feed those people, and trees are being cut down to make room for it all.

Paper production is one of the more well-known other reasons for deforestation. If you’re wondering, a tree produces about 8,333 sheets of paper.20 A whopping 626,000 tons of paper are used to produce books each year in the US alone.

An average textbook contains about 700 pages, and about 30,000,000 trees are cut down to produce textbooks.20 Fortunately, there are a number of ways to reduce the number of textbooks needed, and many schools are embracing and opting for virtual books to counteract this amount.

The Link between Deforestation and Climate Change

Many people wonder why deforestation is linked to climate change.

The most obvious reason is that according to the US government, deforestation directly contributes to about 12% of all greenhouse gas emissions.24 Mature trees store carbon in their branches, trunks, leaves, roots, etcetera, and the forests themselves stores large amounts of carbon in their soil, which reduce and remove carbon emissions from the atmosphere.

In fact, the UN environmental, developmental, and agricultural chiefs issued a joint statement saying that “Forests are a major, requisite front of action in the global fight against catastrophic climate change – thanks to their unparalleled capacity to absorb and store carbon. Forests capture carbon dioxide at a rate equivalent to about one-third the amount released annually by burning fossil fuels. Stopping deforestation and restoring damaged forests, therefore, could provide up to 30 percent of the climate solution.”

They further noted that “2020 will mark a pivotal moment in humanity’s quest for a sustainable future, when greenhouse gas emissions need to start declining if we are to avoid the most severe impacts of climate change.”6

The number of how many trees are cut down each year is so staggering, that if they were stacked on top of each other and just 3m (10 ft) tall, they’d reach the moon and back almost six times! 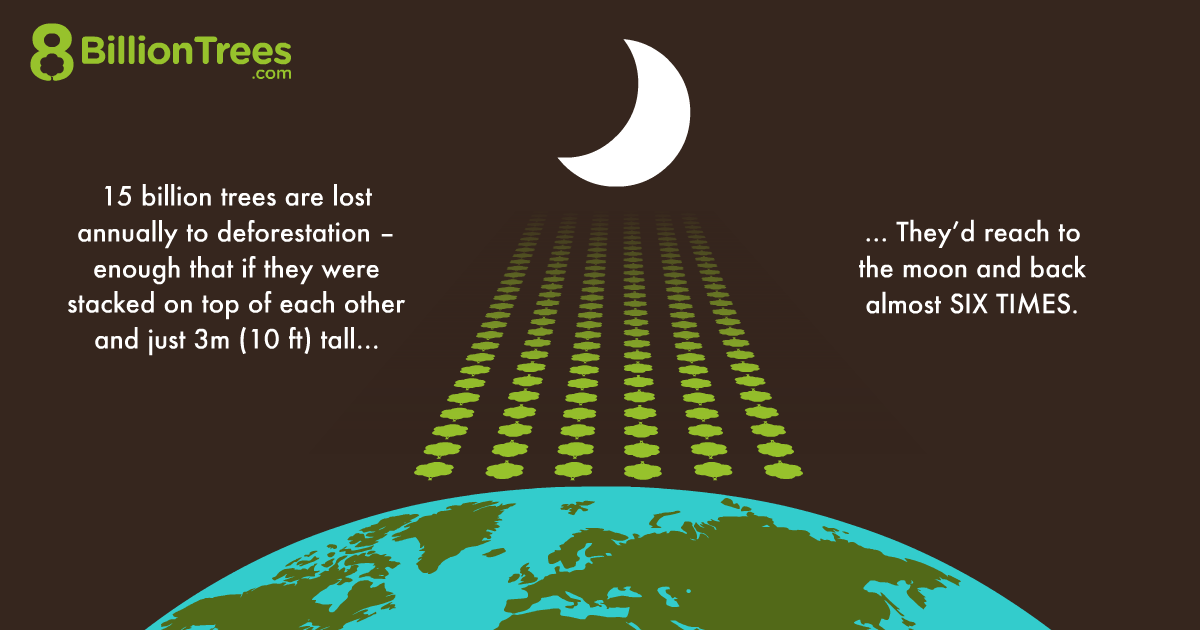 So, why don’t more people know about this cause and effect?

There’s really no one answer to this question. About a third of Americans don’t even believe that Global Warming is real, so it should come as no surprise that they aren’t familiar with the details.3 People also tend to avoid conflict. Americans overestimate the percentage of their peers who don’t believe in climate change.3 The result is that they avoid what they believe to be a controversial topic; in essence, this erroneous belief shuts down communication.

Deforestation in the Amazon

When people think of deforestation, the first thing that often comes to mind is the Amazon. The Amazon Rainforest has been called the lungs of the world, and we have a duty to take care of it. At least 390 billion trees are located in the Amazon.8,23 For perspective, that’s a forest roughly the size of the continental US.34 There are about 2.7 trillion trees in the world, so the Amazon contains about 14% of the world’s trees.5

Which Trees Sequester the Most Carbon?

Likewise, Mangroves are particularly good at sequestering carbon because their root system is particularly designed to store CO2.

Why Biodiversity Is Crucial to Survival

The World Health Organization has concluded that biodiversity is critical for sustaining the ecosystems that we rely on for our nutritional needs.30 It has also noted that along with the loss of biodiversity, we are losing many critical genes and chemicals before scientists get a chance to study them.

Keeping the planets’ trees healthy and populous is not only good for the climate, it’s good for all of our existence. Trees are one of nature’s powerful ‘carbon sinks,’ areas that sequester and remove carbon dioxide from the atmosphere.

Since we’re making more and more CO2 every day, and simultaneously removing the planet’s method to deal with it… the equation is hugely imbalanced.

It’s difficult to find up-to-date statistics for Philippine deforestation due to funding issues, but from 2003-2010, the Philippines lost nearly 1% (50,000 hectares) of its forests per year.9 This is particularly distressing as the Philippines is considered to be a biodiversity hotspot.28

From the moment the first colonists set foot in America, deforestation began. It hasn’t stopped. In the US, deforestation rates are at about 385,000 hectares per year, but that’s not the entire story.

The US contains about 8% of the world’s forests; nearly 1/3 of the country is forestland or about 304 million hectares.26 Just over half belongs to the government; the rest belongs to private entities.

As mentioned previously, 2020 was a record-breaking year for wildfires, and not in a good way. Climate change is forcing America to reevaluate forest management, and unless action is taken soon, years like 2020 could one day become the norm.

We’ve already mentioned the fact that deforestation is actually making pandemics happen, but the additional loss of biodiversity and associated consequences aren’t actually the scariest thing about deforestation. Forests can actually have profound impacts on the weather. The rainforests of South America, for example, don’t just impact weather in South America – there’s evidence to suggest that they actually impact the global water cycle.17Thirsty?

Deforestation affects ecosystems, nutrition, weather patterns, and even the climate.17 But, it also impacts wildlife by destroying habitats and ecosystems, and there are other results:

This problem is huge! But, there are ways to combat it.

Imagine what would happen if a farmer harvests his crops, but never planted new ones! It doesn’t take a genius to figure out that things won’t end well, but that’s exactly what’s happening with our forests in much of the world.

In fact, we’ve lost 46% of the forests that existed at the dawn of human civilization.5 Forest management isn’t just our moral obligation to the planet – it’s common sense.

Speak out. Make a difference. Make your voice heard. The US and Europe have stabilized their net rates of deforestation and have actually begun gaining trees in recent years. These sustainable models could work elsewhere, but only if we all work together.

You have the power to make a big difference in controlling and eliminating the impacts of deforestation. Many groups around the world are working to plant trees every day, and a small effort on the part of everyone could turn the tide and reduce the number of trees cut down every minute, every day, and every year.

4Becker, A. (n.d.). Rates of Deforestation & Reforestation in the U.S. Retrieved from Seattle Pi: <https://education.seattlepi.com/rates-deforestation-reforestation-us-3804.html>