Trees come in all shapes and sizes – some of them are very weird and so outlandish that you might not be sure if they really sprang from Earth’s soil and not some distant planet! From towering, bulbous behemoths, to trees that could fit nicely in a Dr. Seuss illustration, here are seven of the weirdest and strangest-looking tree species in the world.

This wacky-looking tree looks like it came straight out of a Dr. Seuss book. Its most well-known characteristic is the swollen base, giving the tree a bulbous silhouette and making it look quite cartoony. In contrast to this voluptuous trunk, the leaves are long and narrow.

As stated in its name, the Queensland Bottle Tree (also known as the narrow-leaf bottle tree or the “kurrajong”) hails from Queensland, Australia, and New South Wales. It can stretch up to 25-40 feet tall by 20-30 feet wide.14

Although its appearance is quite comical, it’s quite advantageous for the arid landscape where it resides. This tree can withstand drought conditions, along with frost and other weather extremes because it is able to store vast amounts of water in its trunk. Millions of people the world over have come to appreciate the Queensland Bottle Tree, so much so that it’s become a popular ornamental plant. Who can blame them? The tree’s dainty yellow and pink flowers are truly a sight to behold, especially when juxtaposed to its robust base.

Thankfully, its conservation status seems to be in good shape. The Queensland government categorized this species as “Least Concern” under the 1992 Nature Conservation Act.15

The Monkey puzzle tree, also known as the “Chilean Pine,” is a peculiar-looking evergreen species. Implied by its secondary common name, the tree is native to the South American country, Chile, where it thrives on the Andes’ volcanic slopes, but its range extends into Argentina as well.

When left to their own devices in the wild, these weird trees can grow to a staggering 50-80 ft in height and 22-30 ft in width. Its bark isn’t the typical forest brown color, this tree’s woody exterior is grey, with wrinkles that look like an elephant’s skin.1 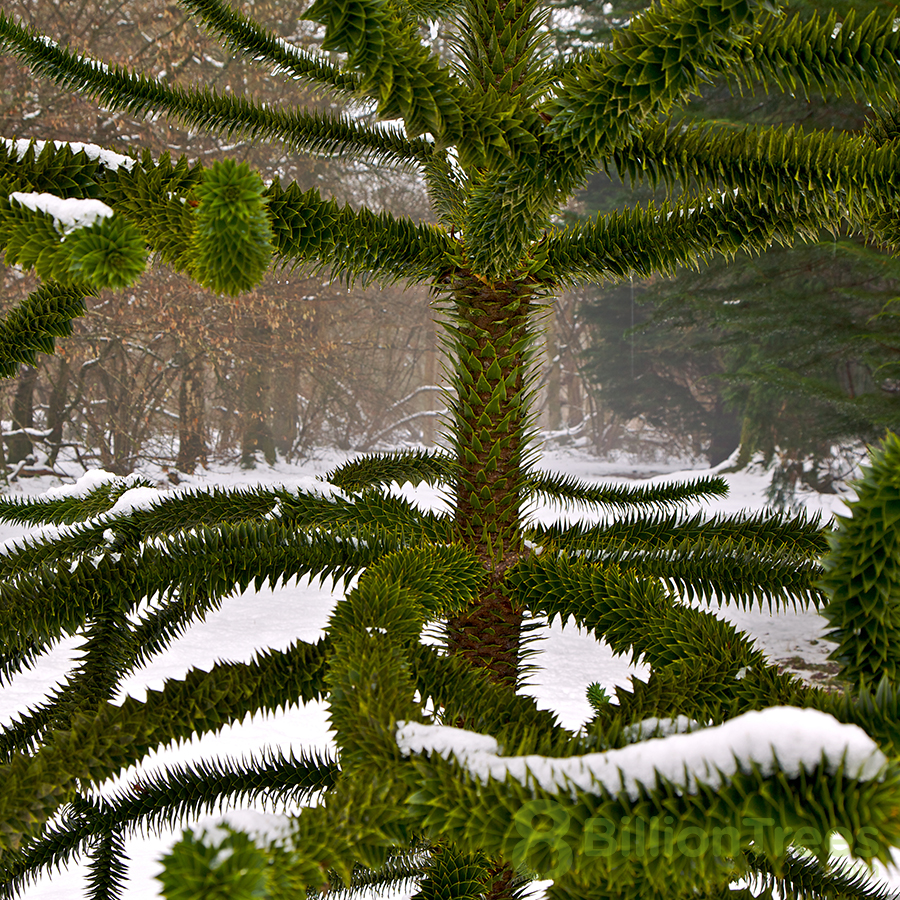 The Monkey Puzzle tree’s pointed leaves are arranged in a spiral formation and are packed so densely that the tree appears to be growing thick extensions of leaves instead of actual branches.

Interestingly, these trees only live for about 10-15 years, a relatively short lifespan for a tree, especially a conifer, which are known to live for several hundred years.2 Still, the Monkey Puzzle is a survivor. It shines in times of environmental flux, with its optimal conditions emerging after:

Unfortunately, it is listed as an endangered species by the International Union for the Conservation of Nature (IUCN)3. The most concerning threats to its survival are livestock ranching, logging and fire.

This is one of the most fashionable trees around. The rainbow eucalyptus wasn’t satisfied with the traditional brown and green, this woody plant went all out and donned all colors of the rainbow… to an extent.

The 60-75 meter tall tree features a vibrant color scheme that can only be seen when the bark sheds. As the inner bark (otherwise known as the “phloem”4 is exposed), the colors start to change slightly, ultimately presenting the following hues:

This tree’s colorful, yet unusual, bark has captured the attention of horticulturists worldwide. As such, it’s become a popular ornamental plant, traded internationally, from as far as Brazil to Taiwan. To see the plant in its natural habitat, you’ll have to travel to Indonesia, Papua New Guinea, or the Philippines.

In these areas, it lives similarly to the Monkey Puzzle, described above. This tree grows best in soils that have been recently disturbed and prefers riparian habitats (areas near rivers)5.

When you’re done gawking at the gorgeous multi-color trunk, you’ll notice the delicate white flowers that grow among the broad, evergreen leaves. This species is visually stunning, although it does fall short of the large amounts of oil most Eucalyptus trees are known for. The IUCN currently lists this species as vulnerable6, with logging and agriculture being the most threatening types of human activity.

You’ve probably heard of this weird tree by association. If you’ve ever passed by “dragon’s blood” stick or resin incense, or a number of similarly labeled skincare products in the grocery or beauty store, you’ve had an indirect introduction to the Socotra Dragon Blood Tree.7

The famous, crimson fluid comes from this aesthetically intriguing species and its close relatives in South America. However, the 33-ft-tall Socotra variant can be found on the Yemeni island where it gets its namesake, surrounded by the Arabian Sea. Years ago, beliefs suggested the blood-red resin came from the bodies of divine beings. The ancient Indian legend goes like this:

A dragon engaged in a ruthless battle against the god Shiva, an elephant, on behalf of Brahma, another god. During the fight, the dragon bit Shiva. As the clash came to an end, Shiva fell onto the dragon, crushing it to death. Their blood mixed and became the resin in the Dragon Blood Tree.8

In reality, the substance is a natural defense mechanism against physical damage, disease, and invasion. But, scientists have more to learn about the precise advantages the substance offers the plant.8 Sadly, the Dragon’s Blood Tree is yet another species that the IUCN considers vulnerable at this time. It’s also a victim of logging; however, droughts are negatively impacting existing populations, too.9

The Kapok Tree is one of the fastest-growing and dangerous species on the list. It can grow at an average rate of 6 feet yearly, doubling that of many deciduous species.10

Once mature, this tree can measure up to 80 feet or taller and expand to 5-8 feet in width – above the buttress, that is. The “buttress” is the system of roots that extend directly from the trunk and grow above the ground, sometimes up to 15 feet. It is one of the key features that sets this tree type apart from many other intriguing species.11 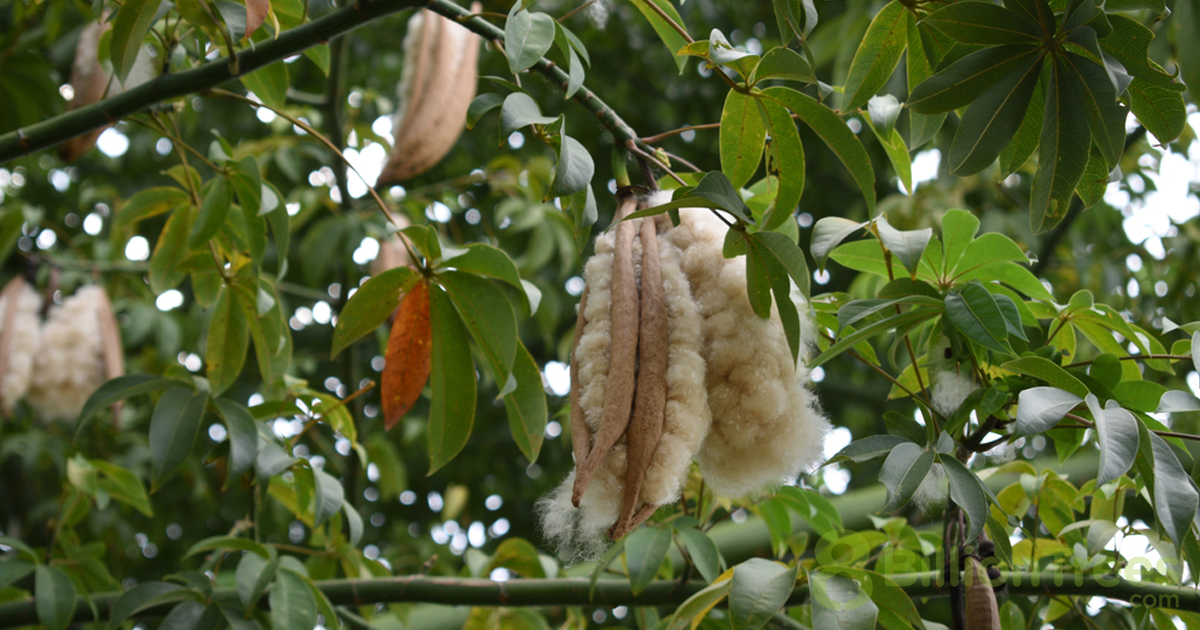 So, what makes them dangerous? This tree contains several chemical compounds that are known to cause adverse reactions in animals. These include malvalic acid, making up 7-8 percent of the seed oil content, and sterculic acid, accounting for 3-4 percent.12

Possible side effects of consuming the seeds or oil include eye, throat, and nose irritation or bronchitis. Still, there is beauty to be found in this strange plant, evident even in its odd fruit. The 3-6”-long fruits are naturally enveloped in a dense, cotton blanket. These fibers can later be used for insulation, cushioning in bedding, and more.

Fortunately, the Kapok’s future appears bright. The IUCN lists this species as “Least Concern,” making its safety far more certain than many others. This isn’t to say that it’s threat-free, though, the Kapok tree is still subject to logging.13

Here are two of the world’s strangest trees… so abnormal, that they seem almost extraterrestrial.

The Baobab is one of the most important tree species in the world. It has more than 300 unique applications across numerous industries. Yet, before humans advanced to intellectual levels complex enough to recognize the tree’s evolutionary prowess, we were awe-struck by its beauty alone.16

Even just viewing a picture of a baobab tree, many people are immediately stunned by its sheer size. It’s clear right away that this is one of the most visually imposing tree species on the planet. Yet, it’s not the only the tree’s height that sets it apart, but its remarkable width that hardly tapers as it gets taller, and the strange configuration of branches at the apex. 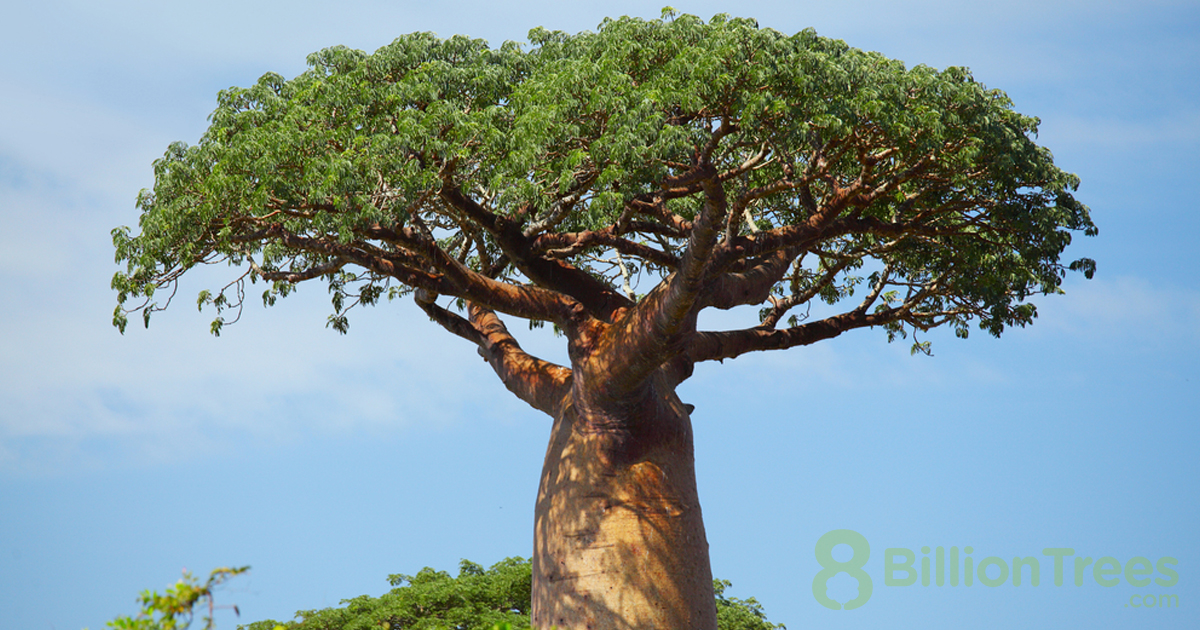 Almost all 20+ meters of the tree’s height is smooth and branch-less until you reach the root crown, where a small collection of branches welcomes bush babies, bats, and bugs. This is another tree that’s highly specialized to withstand dry seasons, able to hold an incredible 30,000 gallons of water.17

As big and burly as this weird tree is, its populations are weakening due to grazing, excessive harvests, and a general failure to implement effective conservation strategies. Since the baobab tree isn’t one species, but a group of related ones, there is no singular status to represent them all. However, the Madagascar Baobab, in particular, is “Least Concern,” according to the IUCN.18

This tree quite literally looks as if it’s growing a bunch of Martian egg sacs on its trunk. Most people are used to seeing trees covered in bark, which can be either rugged or smooth. But, not this tree.

The Jaboticaba tree took its trunk decorations to a whole new level. Instead of growing its fruit on the branches (like a “normal” tree), the Jabotica grows them right out of its trunk. This creates a strange appearance, as if the plant is covered in growths of some kind. The shiny, round fruits can grow sparsely or densely up and down the length of the tree, making the tree look somewhat squishy from afar. 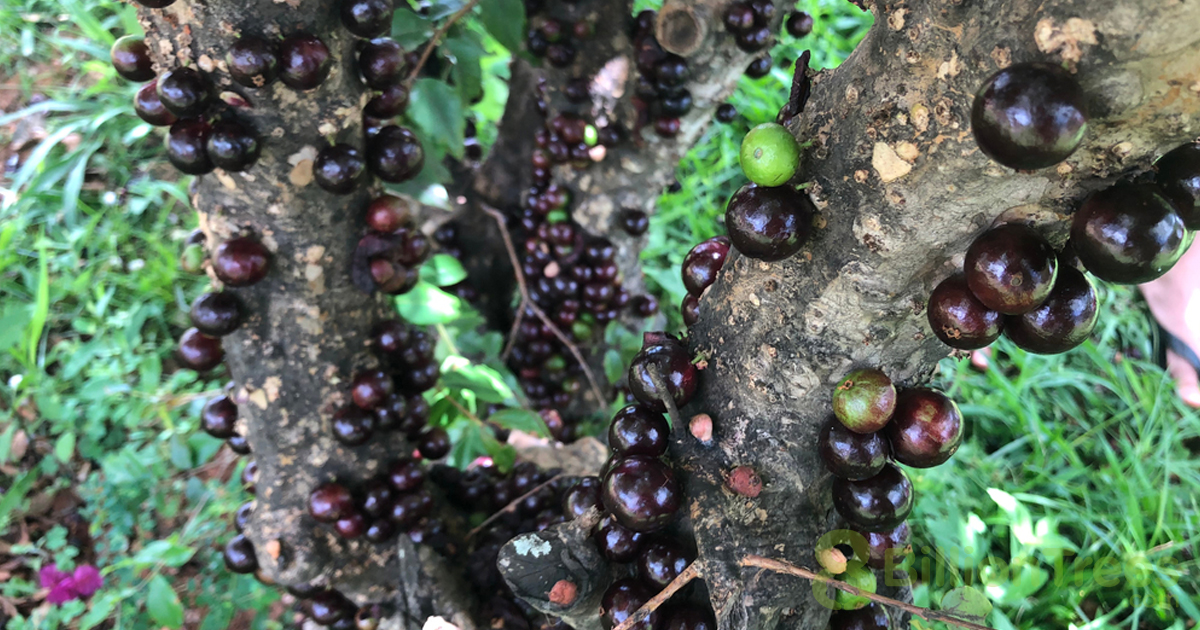 The Jabotica grows naturally in the hills of Brazil, specifically in Rio de Janeiro and Minas Gerais. It can also be found in Bolivia, Paraguay, and northeastern Argentina.19 And, while it is a slow-growing species, can ultimately reach 10-45 feet in height, depending on location.

This is another species that’s doing relatively well in its natural range, considering that the IUCN labeled it “Least Concern.”20

No Matter How Bizarre They Look, Weird Trees Are Crucial for Survival

In light of the ever-amassing effects of human expansion, the world stands to lose some of the most widely adored and spectacular species: trees.

Trees are captivating, and tower over the earth, offering shelter and detoxifying the very air we breathe. Yet, human activity threatens their continued existence, especially in the form of deforestation, which eliminates 10 million hectares per year.21

These massive losses can have devastating effects on global and local habitats, as deforestation is known to drive the spread of infectious diseases, and, more notably, climate change.22 Tree planting carbon offset programs can help reverse that dynamic.

You can make a difference in the fight against climate change by using an ecological footprint calculator to figure up your emissions, and then choose one of the best carbon offset companies to help you erase and remove them.

21Food and Agriculture Organization of the United Nations. (2020). The state of the world’s forests 2020. https://www.fao.org/state-of-forests/en/