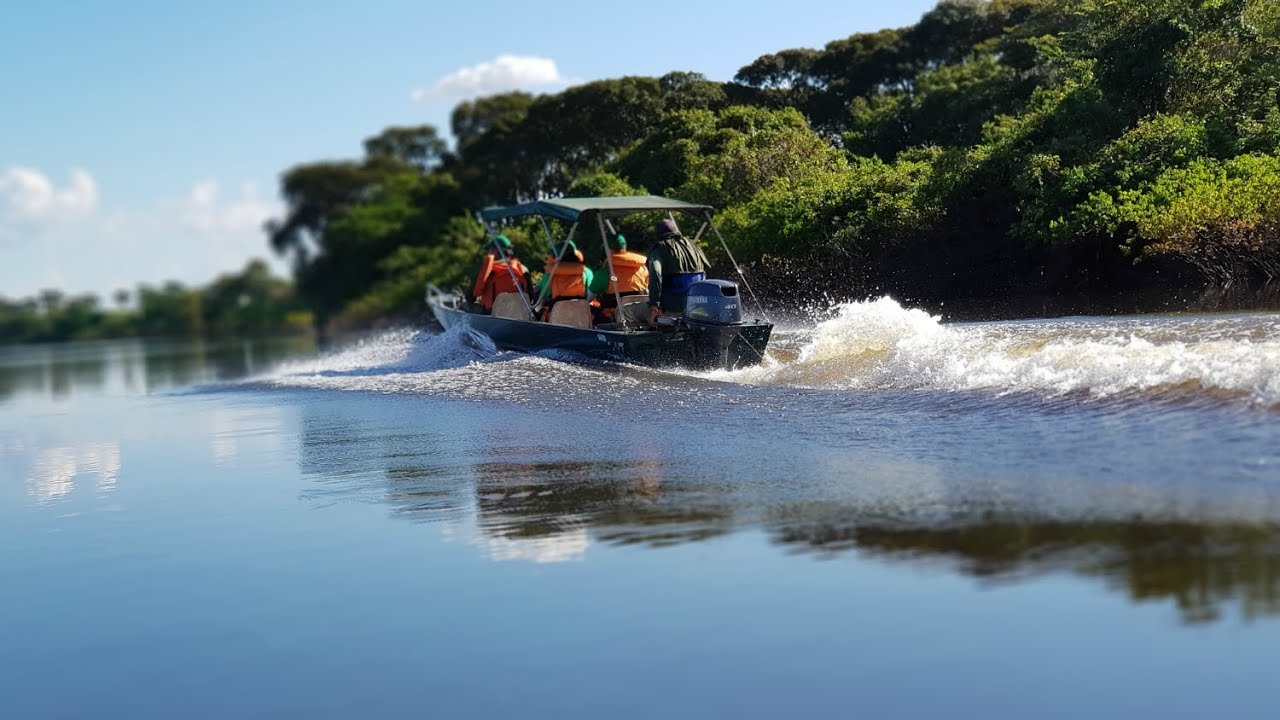 Brazil is historically known for its insane rate of deforestation, and in 2005 ranked first for the amount of forests removed annually. It’s just one of the reasons that 8 Billion Trees has planting operations going full-force there to help save the Amazon Rainforest.

In fact, 8 Billion Trees is the only organization in the world that has gained the authorization to plant in the states of Tocantins and Para–which is home to some of the worst destruction currently taking place.

We plant a variety of species in Brazil but some of them include:

Shockingly, over 270,000 square miles of rainforest have disappeared in just the past few decades. To put that into perspective, in less than six years, Brazil deforested an area bigger than Greece. The World Wide Fund for Nature, in their annual Living Planet Report, confirmed Brazil is being destroyed at an “alarming” rate.

And in November of 2018, Brazil’s government confirmed the worst: deforestation figures are at their highest in over a decade. They have risen over 13 percent since last year. Furthermore, illegal logging and agriculture are pushing deforestation rates higher and higher.

Deforestation is particularly damaging in Brazil where Amazon rainforests are located. Scientists label these forests as “carbon sinks” for their ability to absorb large amounts of harmful emissions. Essentially, a carbon sink is a natural part of the planet (the ocean is one of the largest, but vegetation areas, like the Rain Forests, are another) that holds more carbon dioxide than it releases, which helps remove this harmful, heat holding gas, from Earth’s atmosphere. There are only a few areas on the planet, like the rainforest, where global warming gases can be absorbed—making them absolutely crucial to maintain before they go extinct.

Making the situation worse, the jungle environment is rich in biodiversity and contains countless species, many of which have not yet been discovered. Scientists estimate the number of unknown species to be in the billions.

Only by combating the widespread deforestation in Brazil can we combat the terrible environmental effect from the loss of millions of trees. Unlike other areas we plant, Brazil is in the heart of the Amazon jungle. Once endemic species there go extinct, there is no going back—they’re gone forever.

We are excited to announce that our team on the ground is expanding!

Eduardo Risuenho, our biologist, is a specialist in ecology and conservation biology, with 17 years of experience in managing forest restoration projects, water resources management, and environmental education. We’ve also hired Maycon Garcia as our Brazil Projects Director, helping to manage our ‘growing’ projects, in a region that so desperately needs to be restored. By managing these nurseries, these dedicated individuals are helping us expand our efforts.

Our new planting sites in Para, Brazil have been staked out and are ready for native saplings!

After painstakingly gathering native seeds from a variety of species, our Brazilian team plans to plant the following trees at our Cantão planting site: 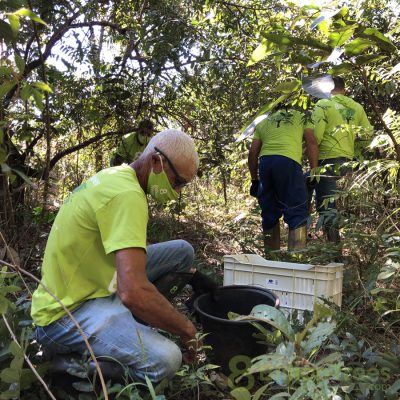 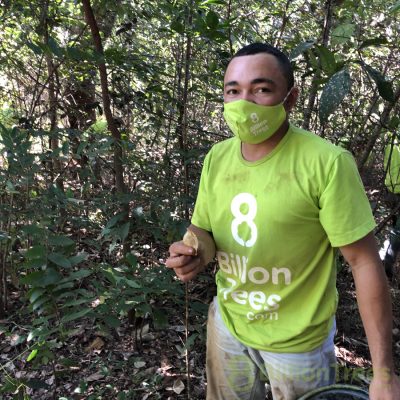 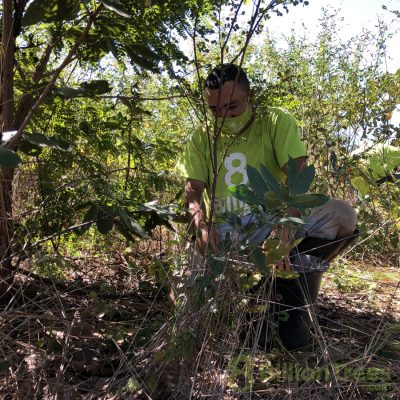 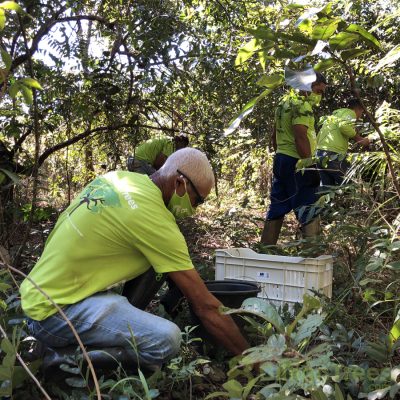 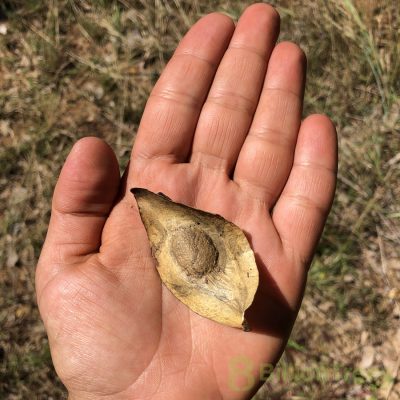 The Tocantins Fauna Center was established to guarantee the protection of wild fauna through actions designed to assist animals that are in imminent danger, as well as carry out sociological, environmental and educational activities that ensure the population’s health and assist the fight against illegal trafficking.

It works on two fronts, through the Wild Animal Screening Center (CETRAS) and the Environmental Interpretation Center (CIAMB).

CETRAS’s purpose is to receive, identify, screen, recover and release wild animals that are saved during inspections, rescue operations or voluntary delivery.

CIAMB works to implement and support educational programs, projects, and campaigns that protect wildlife, raise awareness and deliver practical interactions with nature. These important tasks are done preferentially, with the focus on species categorizations:

CETRAS employs a team of three Veterinarians, a Zootechnician and six assistants. These experts feed, work and interact with the animals on a daily basis, as well as daily cleaning the enclosures, which is crucial to the health and well-being of these beautiful creatures.

Animal handling is performed with PPE materials (puçá, cambão, traps, transport boxes, cages, etc…), but their equipment needs updated to ensure the safety of both animals and professional handlers, something that 8 Billion Trees is working to provide.

The feeding of the animals is carried out according to species need, therefore, the center requires large amounts of a variety of foods, including fruits, vegetables, meats, eggs, zero lactose milk, and more. 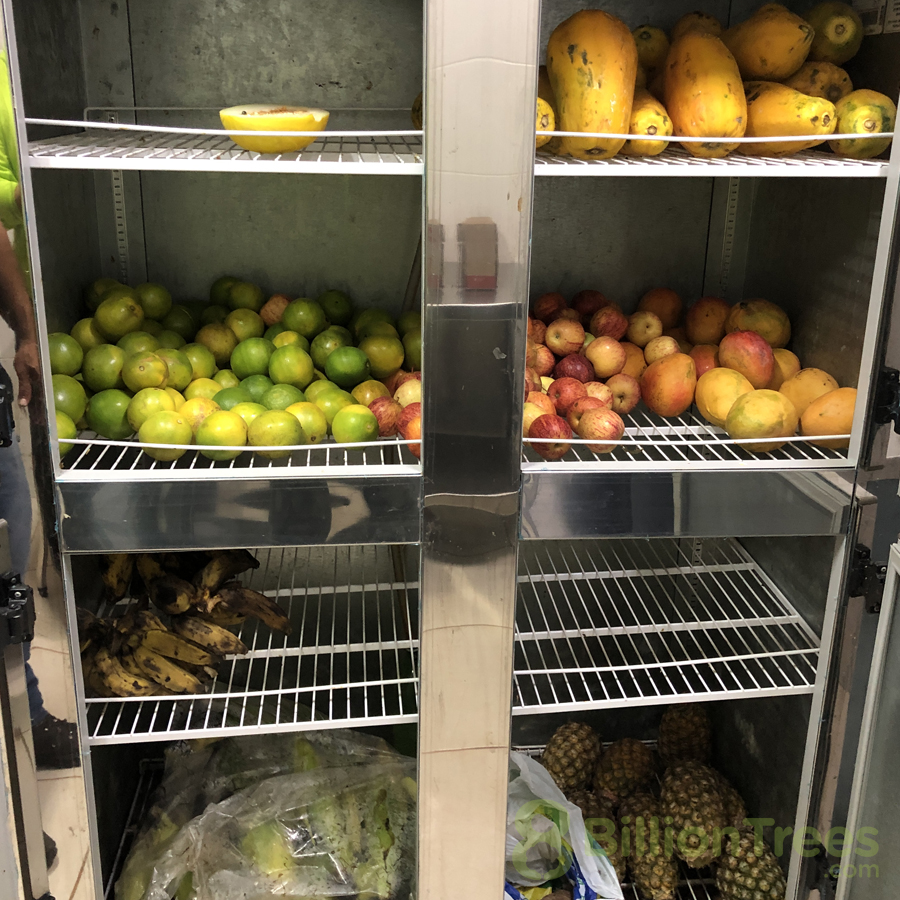 Mayumi Caitano Matuoca explained, “We do what we can with the money we have, [but] it is a struggle to offer the best food, today we cannot offer specific rations, and a day comes when there is a lack of milk or another product. The support of 8 Billion Trees has helped us not to lack food for these animals, which is very gratifying.”

The clinical part of CETRAS is composed of a good structure to work, despite the lack of medication, and the team constantly works to enrich the environment of the enclosures, building toys, hammocks, and more.

Cefau, who is already four years old, resides in an enclosure that is acceptable size, but experts agree that he would be happier in a larger area. 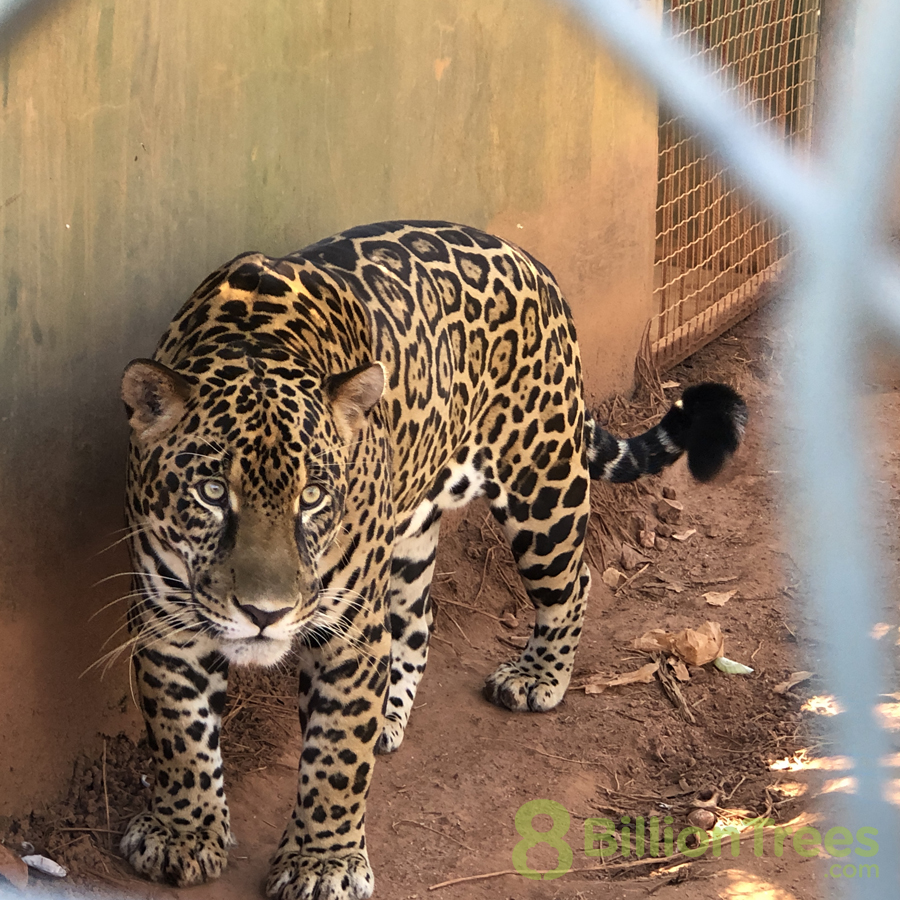 When our team visited the center, they quickly realized that the animals and the team members have a great relationship, with many of the Macaws and parrots demonstrating strong attachments to the CETRAS team. In fact, many that have been healed come back and ‘hang around’ the enclosures! One such feathered friend is “Zeca” a rehabilitated vulture who comes and goes to everyone!

Currently, the center cares for 111 animals, including an adorably cute Howler Monkey, helping these animals get healthy so they can be released back into the wild. A mission that 8 Billion Trees supports wholeheartedly.

How Are Plant Species Chosen and Planted? Which Species Are Used?

The technique we use for reforestation involves producing seedlings, or the direct planting of seeds of native species. Besides needing sufficient quantities of these seeds, we require them to be of good quality and meet the natural biodiversity of the area with native species.

The structure of vegetation in the Cerrado and Amazon biomes is complex. These biomes host a mosaic of environments, and various Phytophysiognomies are found there.

The Cerrado and the Amazon have many particularities besides hosting high biodiversity levels and being geographically large. Knowing the native species – especially involving the fruiting season and the places where they grow – is important.

Every member of the team involved in the project has information on these characteristics.

Today we have approximately 100,000 seeds in our germplasm bank. Germplasm Banks are units that conserve genetic material – including seeds – for immediate or (potentially) future use. We need to collect approximately 4 million seeds and at least 100 different species in total to accomplish our reforestation goals. 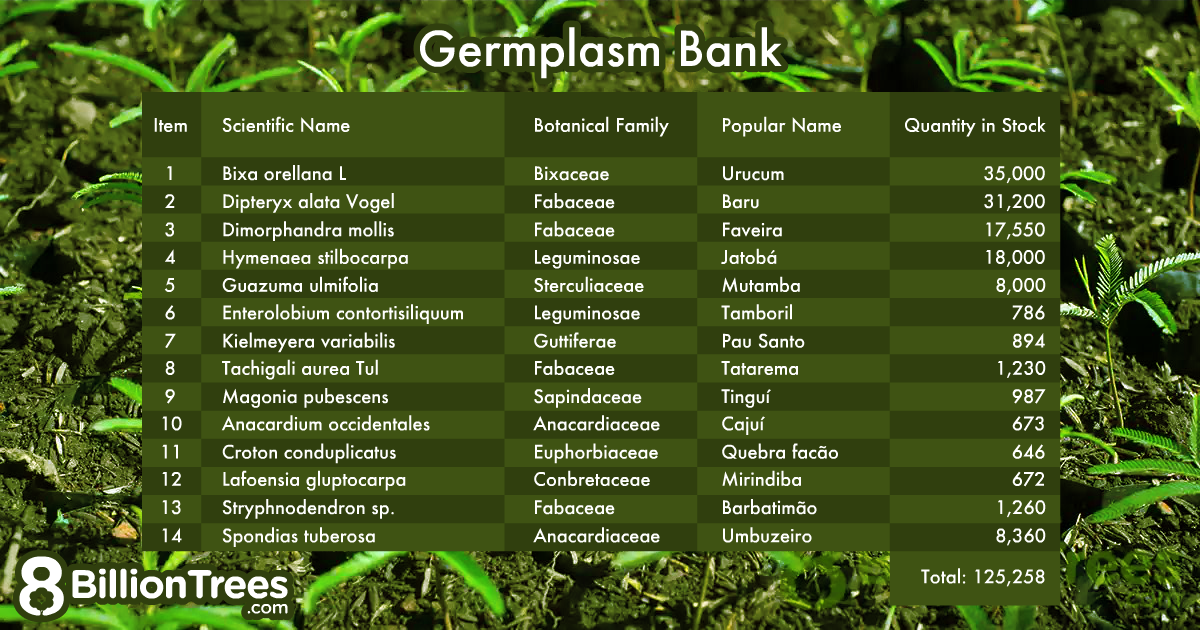 What Is PEL and Why Is it Important?

The Lajeado State Park – or Parque Estadual do Lajeado (PEL) – is a strict protection Conservation Unit under the responsibility of the Tocantins State Government and managed by the Nature Institute of Tocantins – NATURATINS.

The native seedling nursery, which 8 Billion Trees currently manages, is located there.

Why Is The Cantão Important?

Like the PEL, the Cantão State Park – Parque Estadual do Cantão (PEC) – is a strict protection Conservation Unit under the responsibility of the Government of the State of Tocantins and managed by NATURATINS.

The Cantão State Park – the first state park in Tocantins – is one of the most important protected areas in the Brazilian Amazon. Its significance, which far exceeds what is expected for a park of its size, is based on four main points:

The biological richness is because the Cantão, formed by an inland delta of the Javaés River, hosting more than 880 lakes and channels, is a complex ecotone – that is, it is a region where two biomes (the Amazon Rainforest and the Cerrado) meet. It is worth pointing out, however, that this is not an ordinary, gradual ecotone. It is a special ecotone because it is abrupt. Because of that, the two biomes are strongly interdependent.

Because it is an abrupt and interdependent ecotone, the park facilitates the migration of animals by land (during the dry season), river (during the rainy season), and by air. Many species depend on the habitats of the two systems – for example, reproducing in one environment and feeding in the other.

In the dry months, when the lakes and streams dry out and fire becomes a real threat, many animals move from the Cerrado to the wetter areas within the park. These wet areas never dry out, and rivers found there serve as a barrier against fire. This important role as a refuge makes the Cantão a crucial area for the survival of anteaters, armadillos, tapirs, and deer. These animals migrate in large groups into the Cantão in search of food, shelter, and water.

These characteristics, unique to the Cantão, promote unusual adaptations, such as the coexistence of frogs and marsupials from the Cerrado and the Amazon. They also favor the thriving of anteaters, deer, and even Cerrado rheas on the beaches where giant otters and red (or “pink”) river dolphins swim. All these factors illustrate the high biodiversity and interdependence that exists between the two environments.

The annual floods also guarantee the abundance and diversity of local species. Especially striking are the populations of threatened species, such as the jaguar, giant otter, tapir, pirarucu, and the golden eagle.

The biological wealth is well preserved; about 7.5 percent of the area is degraded. The portion of the park that encompasses the Cerrado is relatively small and presents well-preserved areas. The Cerrado is one of the most deforested and degraded biomes in Brazil. The expansion of the Cantão park can further protect its richness.

Due to its many lakes and channels, the Cantão is a breeding and rearing area for fish of the Araguaia River. Therefore, the park is of great importance to the regional economy.

The Amazon hosts the flooded forest (igapó), a unique ecosystem that corresponds to only 2 percent of all the environments that make up the great Amazon biome. The igapó is an environment with unique characteristics, integrating water with the forest. Besides having the capacity to survive six months in the dry season and flourish during the flood season, it supplies the stocks of nutrients and fish needed for sustaining the food chain in the forest at all levels.

Do Biologists Take Care of Animals or Only Plants?

Many people associate biologists with the plant world. Although being a biologist is about caring for plants, the field is very broad and full of ramifications. Besides zoology, which studies animals, the biologist also studies botany (plants), cytology (cells), molecular biology, biochemistry, genetics, biostatistics, biophysics, among other areas that are connected to the study of life.

Biologists research and analyze origins, development, functioning, and the relationship between living things. Biology is important for all living beings that are part of an ecosystem.

What Studies are Being Conducted Under the Scope of Restoration Programs in Tocantins?

Currently, germination tests are underway. We are experimenting with various ways of breaking seed dormancy. Seed dormancy is an evolutionary adaptation resource used by plants to germinate at the most favorable time for their development to guarantee the perpetuation of the species. Several methods are being used to overcome seed dormancy and make the seeds germinate, such as: