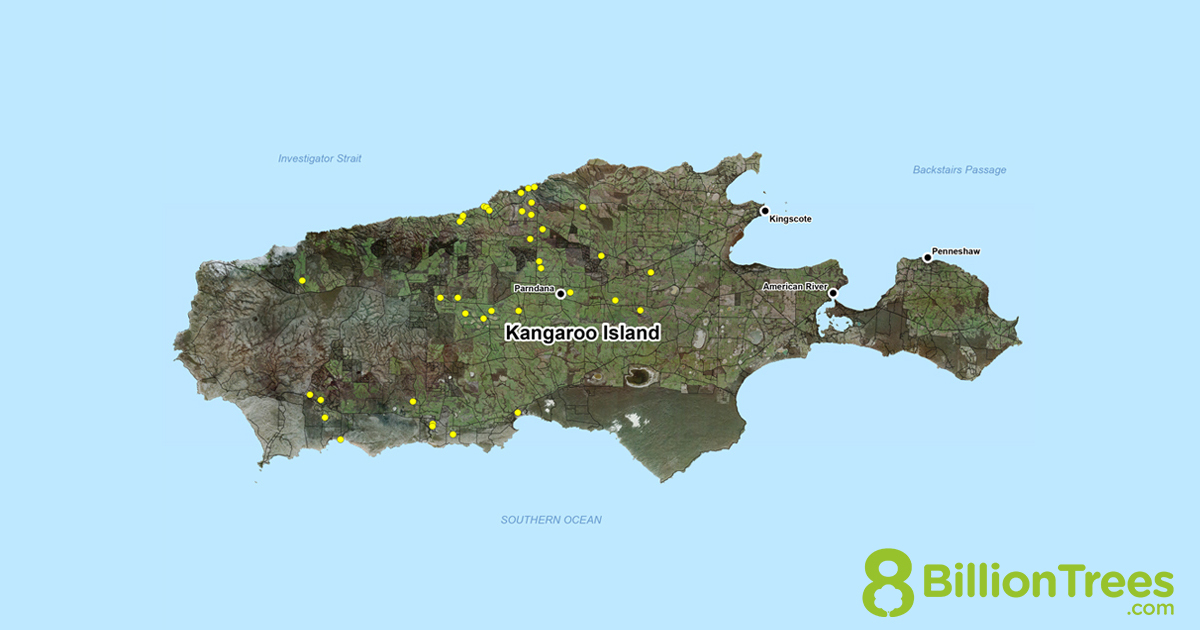 The wildfires currently consuming Australia are nothing short of an international crisis and a climate catastrophe. As these destructive forces sweep through Australia, they continue to eliminate millions of animal habitats and claim the lives of countless animals. Approximately 52 percent of the island burned in 2020. That’s why our team of biologists and tree planters have deemed the country a priority zone for our global reforestation efforts.

The continent of Australia includes a number of islands, but the main body is the sixth-largest country in the world going by landmass, making it an integral part of our global tree restoration project. The country is home to a number of native animal species, including the kangaroo (Macropus Giganteus) and the Little Penguin (Eudyptula minor). Understanding the geography is important because the location is everything when it comes to climate change. But not just that. By choosing correct locations to plant native species of plants, carbon offset projects can do more than just remove carbon from the air: they can also protect and save wildlife.

It’s for this precise reason that we’ve structured our planting projects and carbon offset initiatives around the wildlife on Kangaroo Island, considered one of the continent’s true ecological gems. Little penguin colonies, located in Penneshaw and Kingscote, are currently in decline. And, several other colonies on Kangaroo Island are close to extinction, according to recent censuses. It is truly heartbreaking to watch as animals are left powerless while their homes are destroyed and their families killed.

For these reasons 8 Billion Trees has launched a special planting initiative with the Kangaroo Island Landscape Management board in South Australia to begin supporting reforestation efforts where the wildfires have annihilated habitats. While we can’t change what has already happened, we can be a powerful force for good to stop as much further destruction as we possibly can.

We have expanded our planting sites on Kangaroo Island, Australia. Kangaroo Island is also known as Karta pintingga, after the native aboriginal Australians, the Kartan People, who once occupied the Island but disappeared. Although the island’s economy is principally agricultural, tourism to Kangaroo Island has been increasing over the years, especially to view the several nature preserves that protect the native species of plants and animals on the island.

Currently, 8 Billion Trees is funding the growth of a variety of native species in our nurseries, in anticipation of the planting season that begins (normally) in May. However, we have 13,636 trees already planted and are working on another 3,500 to add to that this year.

Working directly with the Kangaroo Island Landscape Board, our planting sites will soon abound with budding, burgeoning, reforested land! The rainy season has prevented any new reforesting projects for now, but our goal is to have all trees planted over a two-month span… so that by the end of July more of the saplings will be rooted and flourishing.

This koala species is particularly important to the survival of the wider population because it is the only large group free from many diseases, specifically chlamydia. During the fires, many were shipped to the mainland in order to save their lives… but it is sadly a one-way ticket.

In order to reestablish the native population, these koalas need an environment that will allow them to survive and thrive. So, 8 Billion Trees is working hard to make that happen.

Although most of the work we undertake is coordinated through local governments, getting the word out to the community is just as vital. Much private land was devastated by the massive burning, and to make matters worse, these are the areas that contain the most biodiversity on the island.

So, we’re working on the ground to spread the word about our reforestation efforts to local land owners. This way, they can be a part of restoring the areas that were lost.

Just some of the native species 8 Billion Trees is planting include: