Can we live without trees? There may not be many where you live, but the earth is covered with them. And although there are about 3 trillion trees in the world, that’s actually MUCH less than there were before the industrial revolution.6 Mostly everyone knows that deforestation is bad, have you ever wondered why?

What’s so important about trees? Can humans live without them… and if we can’t, why not?

All of life on Earth depends on trees for survival. But, deforestation is causing problems in ways we can’t even comprehend. Although the complete annihilation of entire ecosystems is terrible, it’s actually worse than many people think. Recent studies show that the slashing and burning of rainforests are actually helping the rise of pandemics, like COVID-19. Plus, the far-reaching impacts of deforestation include climate change (increased floods, droughts, wildfires) and atmospheric destruction.

But, there’s some good news. As awareness increases about the dangerous impact deforestation is having on the planet, ways to combat it are also increasing…(Keep reading to learn more!)

Trees play an integral role in maintaining the delicate balance of nature, while providing all sorts of benefits for every living thing on the planet. Here are the basics:

Water is one of the fundamental requirements for all life. Forests have a huge impact on the water cycle and are critical for sustaining the water supplies of many nations, such as Brazil, because of the direct impact trees have on global weather patterns.19

Although the earth is covered in water, only about 0.5% of it is available freshwater (potable). To put that into perspective, if the earth’s supply of water was 100L (26 gallons), the drinkable portion would be 0.003L (about ½ teaspoon)!17

Basically, trees suck water from the ground and release it into the atmosphere, creating “rivers of water in the air,” which form clouds and deposit the water back to Earth in the form of rain. Less trees mean less life-sustaining water everywhere.19 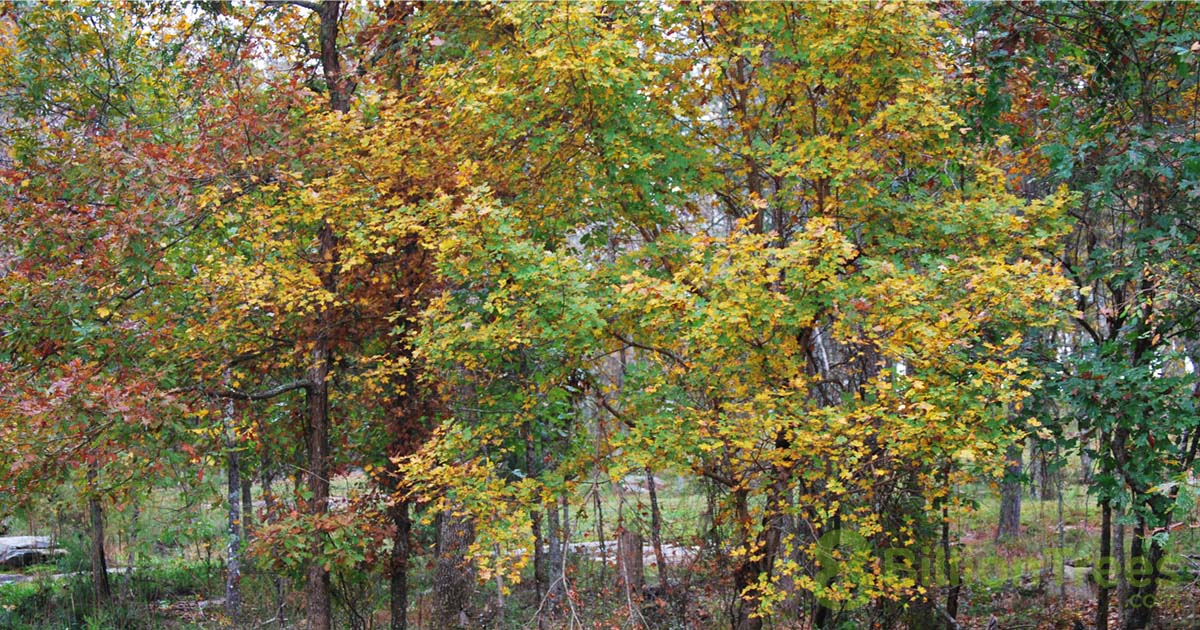 Comfort, Beauty, and Many Other Tree Benefits

While it’s obvious that some trees, such as Japanese cherry blossoms, are beautiful to look upon, and others provide us with food, lumber, or other tangible benefits, trees have less obvious uses as well.

For example, cities and other locations create heat islands that actually increase their local temperatures, but the presence of trees can lower peak summer temperatures by up to 9°.18 That’s a huge benefit, and one of the reasons that sustainable architecture is ‘growing’ in popularity.

So, Why Do We Need Trees To Live? Understanding the Dangers of Deforestation

Deforestation adversely affects ecosystems, local weather patterns, pollution, and even the climate.11 It’s difficult to overstate just how important forests are to our existence. After all, they cover about 30% of the earth’s land surface.9 It’s worth noting that about 250,000,000 people live in forests or savannas and depend on them for their well-being. That’s about 75% of the population of the US.16

Deforestation is especially terrible in Latin America. Mexico only has about 6 percent of its rainforests left, Central America has a meager 5 percent remaining, but other countries like Ecuador (with 19 percent) and Guayana (which has lost 80 percent!) are losing their forests rapidly.

As mentioned above, other impacts, like making pandemics more frequent, are caused by deforestation, so all life on Earth is threatened when trees are removed.

Trees and Oxygen: Balance of Nature

Besides maintaining the earth’s water cycle, fighting global warming, providing shelter, food, shade, medicine, and weather modulation…. Trees are crucial for life because they actually generate most of the air we breathe.

Forests have an enormous effect on the quality of the air we breathe, acting as a filter that strips pollution from the atmosphere. In fact, trees remove amazing amounts of carbon dioxide (the most abundant greenhouse gas) from the atmosphere. They store the carbon in their wood and roots (often called sequestration) and release oxygen back into the atmosphere.7

How significant is their aid in the fight against Global Warming? According to the World Resources Institute, if tropical deforestation was a country, it would rate third in CO2 equivalent emissions behind only the US and China.5

You may have heard that we’re going to run out of oxygen if current deforestation trends continue. Although that sounds like fear-mongering, it’s mostly true (though it needs context). Let’s break it down into the good, the bad, and the ugly.

Although 3,600 years is a long time, running out of oxygen seems like moving in the wrong direction.

Planting trees is one of the best solutions available to solve the problem since they absorb carbon dioxide and release oxygen. (To see a full list of tree planting organizations click here). But, by continually destroying our forests, it produces the opposite effect, releasing that sequestered carbon dioxide back into the atmosphere and actually consuming breathable oxygen.

Trees Help Us Breathe (How Much Oxygen Does A Tree Produce?)

Trees not only remove air pollution (which triggers asthma attacks), they absorb carbon dioxide and release oxygen.2 But, the air pollution problem isn’t limited to the atmosphere. Global marine de-oxygenation is a well-established, man-made climate problem being researched by the United Nations.15 This leads to a variety of secondary problems, but in simple terms, it kills fish and marine wildlife.

And… one large tree provides enough oxygen per day to supply about four people!14 Just one tree!

What Are The Benefits Of Trees? Trees Help The Environment

Trees directly help counteract the warming of the planet. “The water that a single tree transpires daily has a cooling effect equivalent to two domestic air conditioners for a day.”19 Other benefits include:

How Many Trees Are in the World?

Currently, there are about 3,000,000,000,000. I counted them. Just kidding – these guys did.1 That’s not the most useful metric for us, however, because there’s a world of difference between a tree too small for children to climb and a California Redwood, which can grow up to 130m/425ft. Acknowledging that all trees are different (thus a hectare of forest in the Congo is quite different from a hectare in the Rocky Mountains or Siberia), you can take a look at the top ten countries by forest area in the next section.4 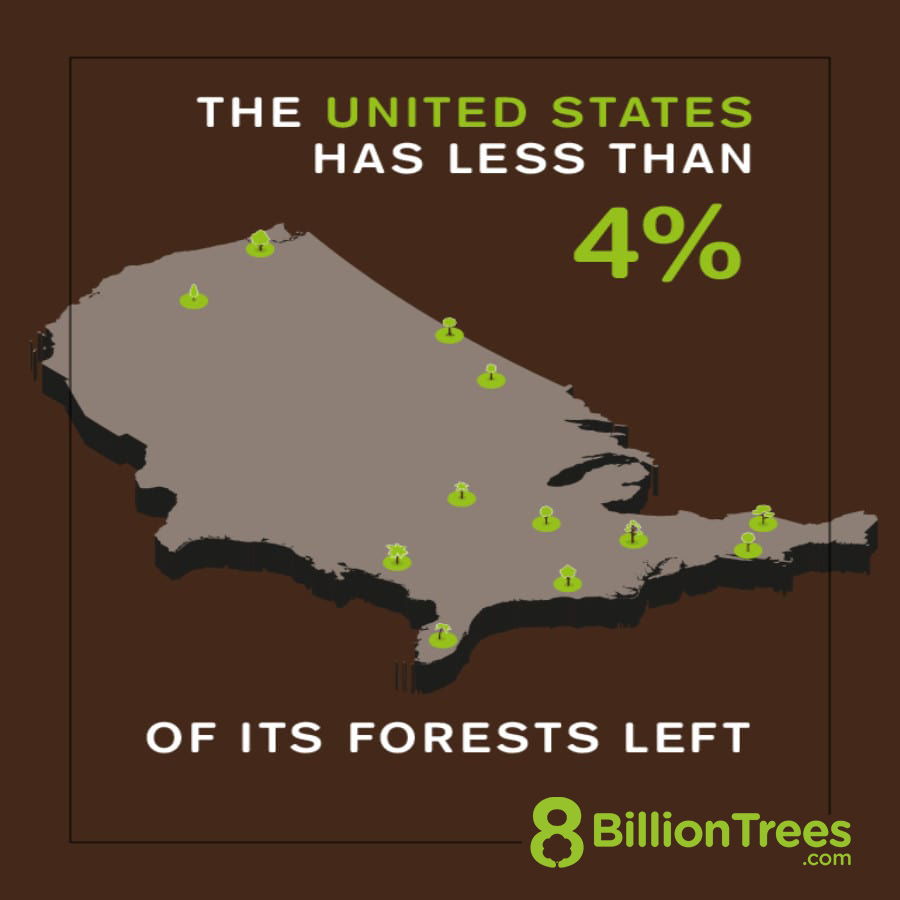 The Food and Agriculture Organization of the United Nations released its Global Forests Resources Assessment last year, which highlighted the fact that we are doing slightly better than the past two decades at stopping deforestation. It also includes lists of how many trees currently exist, and where. However, we still have a long way to go.4

Fortunately, more and more companies are working to erase their carbon emissions footprint by employing reforestation efforts that both sequester carbon and rebuild the magnificent trees that all life on Earth desperately needs, in order to survive.

More broadly, the report breaks down forest coverage by region. Surprisingly, even without Russia, Europe (the smallest continent) is home to the plurality of earth’s forests – about a quarter. This may be partially due to the trend in reforestation and responsible forest management seen in Europe over the last several decades.

Africa and Asia – the largest two continents – both have roughly the same amount of forest land at 16 and 15 percent of the world’s forests, respectfully. North and Central America combine for about 19 percent, Oceania provides another 5 percent, and (thanks to the Amazon) South America provides about 21 percent.

How Many Trees Are Cut Down Each Day?

While it would be challenging to calculate the exact number of trees cut down each day (largely due to a lack of reporting, illicit logging, deforestation due to natural disasters or intentional burning, etc.), if we look at the data over time, some clear trends emerge.4 The conservative estimate is that 41,917,808 trees are cut down every day.

Most net deforestation has taken place in South America and Africa over the last 30 years. And, it should be noted that not all forests are created equally. For example, if a logging operation cuts down 100 square miles of the forest then plants a roughly equal number of trees before leaving, they’ve still essentially destroyed the forest. A forest is more than a collection of trees; the many, many animals that are crucial to the ecosystem will die or will be displaced along with the old forest without preservation efforts. Other adverse effects such as erosion and reduced pollution absorption are also a factor.

That’s why companies like 8 Billion Trees help the conservation of existing forests. By helping to protect the land where ancient forests thrive, we can make sure that in the future, these protected trees won’t be cleared and ‘replaced.’ Regretfully, deforestation continues unabated in some parts of the world such as the Amazon, and although it’s Brazil’s land, it affects us all.10 Planting trees through forestry projects to replace the ones that are lost, and protecting existing forests around the world is a way to help reverse these terrible facts.

What If There Were No Trees? What Would A World Without Trees Look Like?

Honestly put… if there were no trees on earth most animals including humans would perish. It wouldn’t happen overnight, but it would happen. Humans wouldn’t last long without trees, but a world without them would be similar to the moon, or Mars…barren, dry, and devoid of life.

It’s Not Too Late! What Can We Do To Save Trees?

Knowing that we can’t live without trees and nearly every form of life on the planet depends on trees for survival, many people want to know how they can get involved to save Earth’s trees. It’s not too late to make a big impact and reverse the deforestation crisis.

Saving the world’s trees can start in your own backyard. Literally. There are a variety of trees available to plant, from flowering beauties to delicious fruits… and everything in between. And, you can choose hearty species that are native to your region. Not only is this a great way to get started, but it can also (when done with a plan) help you lower your energy costs. Shade trees planted correctly can lower your utility use… which means fewer carbon emissions too!

If you don’t have a backyard, sponsoring global organizations that are dedicated to the reforestation and renewal of the world’s trees can help. To see a complete list, click here.

You can also get involved in local and community projects designed to plant trees. If everyone works together to help protect the world’s forests, the difference we could make would be tree-mendous!

9NASA. (2012, 01 09). Seeing Forests for the Trees and the Carbon: Mapping the World’s Forests in Three Dimensions. Retrieved from NASA Earth Observatory: https://earthobservatory.nasa.gov/features/ForestCarbon

19Yale School of the Environment. (2018, July 24). Rivers in the Sky: How Deforestation Is Affecting Global Water Cycles. Retrieved from Yale Environment 360: https://e360.yale.edu/features/how-deforestation-affecting-global-water-cycles-climate-change