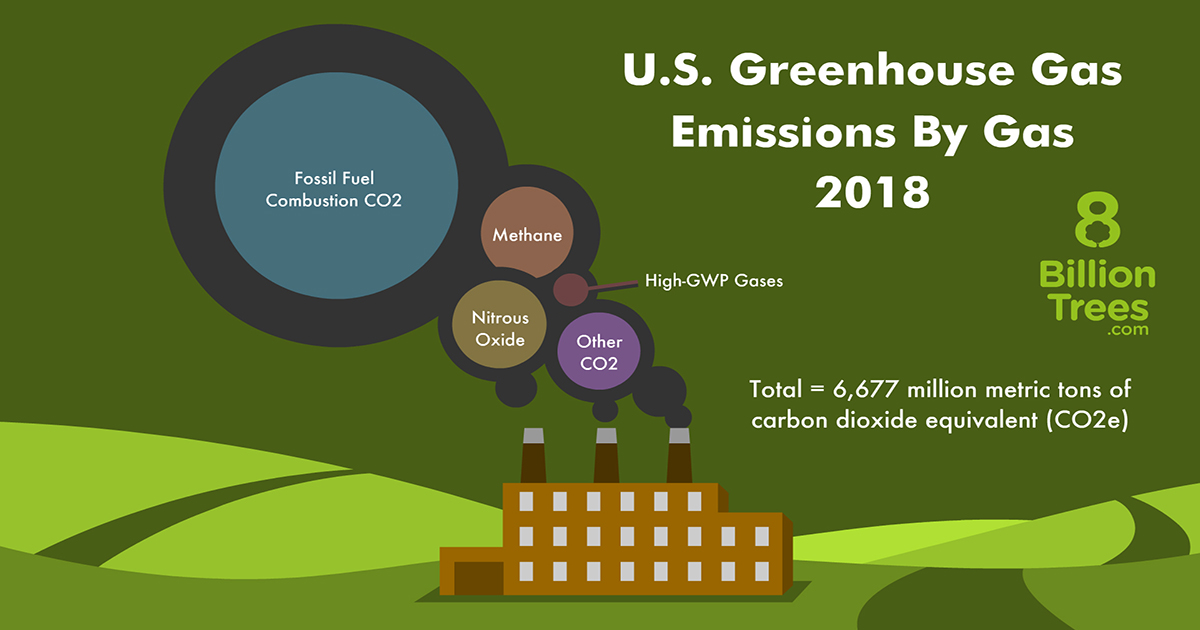 The CO2 emissions of the United States lands the country as the second largest contributor in the world,2 only behind China. Emitting 400 billion metric tons, it is hard to ignore the impact the USA has on the climate crisis the world faces today, making it crucial that the USA reduce its greenhouse gas emissions. But, the good news is that America is showing improvements… the question is whether those changes will be enough in the face of the largest producer, China. Without regulations, China will continue to undo efforts of the rest of the world.

How Much CO2 Emissions Does the Average American Emit?

From these numbers, we can determine that as a country, the United States has made incremental improvements over the past 20 years. But in comparison to where the numbers were 100 years ago and even further back, 200 years, the average American was not producing even one ton of CO2 emissions. Obviously, this change was related to the industrial revolution, but now the task will be to find ways to erase the emissions generated.

There are many sources of CO2, but the primary ones are things that Americans use everyday, including transportation, energy use, industry, and food.

In 2018, 28% of emissions came from transportation, which had increased largely due to the increase in vehicle miles traveled from 1990 to 2018 (a 46.1% increase). Passenger cars and small trucks are the largest culprits, but emissions also come from ships, trains, airplanes, boats and other engines, basically anything that employs fuel combustion.2

In 2018, 12% of emissions came from the commercial and residential sectors. This is largely due to an increase in electricity consumption, but also the management of wastewater, trash, refrigerants, and more. 2

Agriculture, Forestry, and Other Land Use

What Can the United States Do to Reduce Carbon Emissions?

The COVID-19 crisis of 2020 posed a difficult challenge for all of us. But one thing the pandemic taught us is that it is possible to reduce our emissions collectively and get back on track with the commitments the United States made in the 2016 Paris Agreement.

But the economy does not need to come to a halt for the United States to reduce its pollution. This could be viewed as an opportunity to rethink a sustainable future for both the earth and our economy. For example, renewable energy has a much lower carbon footprint than other forms of electricity, while also costing less than coal and gas sources.

You Can Do Your Part Too!

From the electricity you use and your vehicle’s mileage, to the products you buy, everything you do has a footprint. Reducing CO2 emissions starts with making better choices:

But even after doing all of these things, you still have a carbon footprint (just a lower one). Try calculating yours by using an ecological footprint calculator. One way to make up for your carbon footprint is to purchase a tree planting carbon offset that goes toward planting trees or helps find renewable energy sources. There are top carbon offset providers out there… we just need to use them.