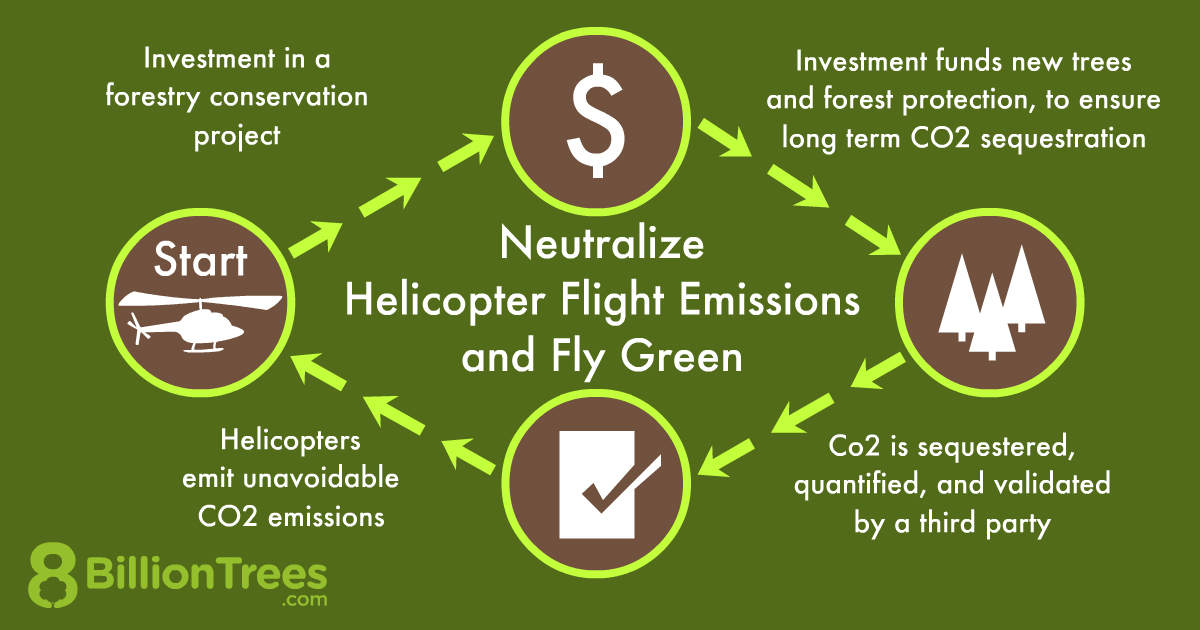 When you think about aircraft carbon emissions, what do you imagine? Most people would think of commercial airbuses ferrying passengers across the. While these planes indeed account for a substantial portion of aviation emissions, they don’t operate alone.

Helicopters are a crucial part of domestic and international transport, especially for medical and defensive purposes. Unfortunately, their operation is rather costly to environmental health, which is why you’d need helicopter carbon offsets in order to fly green.

You can measure your emissions now, using this helicopter carbon footprint calculator for a specific trip!

Luckily, researchers are already on the hunt for opportunities to revamp these machine’s sustainability, and there are ample reputable carbon offset providers to choose from.

If you want to know how to truly neutralize your flight emissions, keep reading…

When most people think about flight-related carbon offsets, they imagine airplanes, particularly commercial airlines like Delta offering passenger transport. You might think about your leisure traveling and how that affects the planet, or how your last business trip changed your carbon footprint. Yet, one often overlooked contributor to aviation emissions is the helicopter.

Although these aircraft, or rotorcraft (rotary-wing aircraft), don’t play as significant a part in average daily life as passenger airplanes, they’re essential to global markets. The leading operational uses of helicopters include:1

With all these uses, you can imagine that there will always be at least one helicopter hovering somewhere nearby. The constant activity is bound to contribute to greenhouse gas (GHG) emissions in the aviation industry. Given how vital these vessels are critical to industries in domestic and international life, enhanced GHG mitigation is non-negotiable.

Plus, despite slowing development, market experts expect the global helicopter fleet size to grow over the medium- to long-term future, potentially reaching a value of $68 billion by 2027.1 Before the market grows to this point, leaders will need to develop an economic infrastructure to allow for meaningful CO2 emissions reduction in the helicopter industry.

The Environmental Impacts of Helicopter Engines

Unfortunately, helicopters don’t get as much attention in popular media coverage of aviation emissions as the airbuses used for passenger transport. Yet, they are a critical component of the industry’s environmental impacts, with some models worse than others.

For example, years ago, researchers tested the engines of two American helicopters: the Army’s Black Hawk and Apache models. Each ran on standard military JP-8 fuel in two General Electric T701C engines and one T700 engine. One of the former was operated on Fischer-Tropsch synthetic jet fuel, derived from natural gas, automatically improving its sustainability over the alternatives.2

After testing three different power settings on each engine, the scientists found that the T701C engine is a much more environmentally friendly option. This engine released far fewer particulate matter (PM) emissions than the T700, in every trial.2

On average, the latter emitted about 0.2-1.4 g/kg of fuel for particulate emissions, while the former only produced 0.2-0.6 g/kg of fuel. Notably, the T701C engines released less of a specific type of PM that makes up “soot emissions.”2

“Soot” is a type of PM that has a diameter of 2.5 micrometers or less, making it a “fine particle.” These are microscopic, smaller than dust at only 1/30 the diameter of human hair.3

When operating the T701C engines on the Fischer-Tropsch fuel, emissions full of these particles fell dramatically. The researchers surmised that this may have been due to the absence of aromatic compounds in the cleaner fuel alternative compared to JP-8.2

Removing these aromatic compounds, formally known as “polycyclic aromatic hydrocarbons” or PAHs, is essential to reducing air travel’s damage to the earth. Scientists report that PAHs present a significant health and safety risk, thanks to their “toxic, mutagenic and/or carcinogenic properties.” They’re especially dangerous to mammals, as these organisms’ gastrointestinal tracts can absorb PAHs quite easily.4

Despite these notable advantages, the study’s results weren’t all good for the T701C helicopter engines. The main drawback with the seemingly eco-friendlier model is its slightly higher NOx (nitrogen oxides) emissions.2

These gases partially make up the ambient air, primarily in the form of nitric oxide (NO) and nitrogen dioxide (NO2). Although NOx emissions do occur naturally, about 10 percent of them come from human activity.5

You breathe in these compounds every day, as the average urban area has a nitrogen dioxide concentration of 20-90 micrograms per cubic meter (µg/m3).

Sometimes these levels are even higher indoors!

Like PAHs, these compounds present a significant threat to human, wildlife, and environmental health. Nitrogen oxides can lead to acid rain and ozone depletion, ultimately causing climate change and harming plant life and the organisms that depend on it.

Luckily, helicopter carbon offsets exist that allow you to get involved with activity that mitigates or prevents CO2 emissions. With these, you can balance your helicopter’s emissions by ‘erasing’ the same amount of CO2 from the atmosphere, making your flight completely carbon neutral.

Helicopters’ impacts aren’t restricted to chemical influence. These rotorcraft are well-known for the excessive noise levels they produce. Though it may only be a mere annoyance to humans, noise pollution from helicopter flights can be severely detrimental to wildlife welfare. Hearing the distant hum of a helicopter may not bother you much, once you’ve gotten used to the sound. Many wildlife can adapt right alongside you, learning to live with the disruptive whoosh noises coming from the rotorcraft’s blades.

Unfortunately, this isn’t the case for all the local wild animals, many of which will be negatively affected by all the noise. In 2020, a team of researchers led by Romain Sordello performed a comprehensive literature review that revealed the numerous harms of the unnaturally loud buzzing in the sky.

Plus, despite getting used to blocking it out, your health is still susceptible to negative effects from excessive helicopter noise.

Some of the most widely reported health issues are:7

Unfortunately, very little data exists on helicopter noise. Some reports suggest that the issue is simply not a priority for stakeholders, so no one really looks into it. The U.S. Government Accountability Office (GAO) states, “[Most] stakeholders do not collect noise data, and existing studies of helicopter noise… are limited.”8

Although their statement reflects the state of research around the Washington D.C. area, it is representative of general interest in the topic. A simple search for scientific publications on helicopter noise reveals that much of the existing work comes from the decades 1970-1990s, with only a few popping up in the 2000s. This means that there have not been significant efforts to study or mitigate modern rotorcraft’s detrimental effects.

Despite the knowledge gap, some regions are taking the initiative and improving their fleet’s sustainability, for the sake of human and environmental health.

How Helicopters are Getting Greener

Scientists increasingly understand the urgency of improved GHG mitigation for helicopters. Given how deeply ingrained these rotorcraft are in domestic and international transport and commerce, they will remain a central part of human air travel for the foreseeable future. This means that humans must act fast to prevent continued devastation on global ecosystems.

Previous government publications noted that the manufacture of quieter helicopter technology stalled decades ago due to claims that it was “immature and slow to market.” Back then, a NOTAR (No Tail Rotor) anti-torque design promised improvement on the noise front. However, economic challenges to keep the innovations affordable thwarted the development.9

Fortunately, some municipalities are making breakthroughs in reducing their helicopters’ impacts. For example, in 2015, the Los Angeles Helicopter Noise Initiative reported “significant progress” on six goals the organization and its stakeholders set the previous year.

Progress on the mitigation of helicopters’ environmental impacts is slow. As of now, researchers and media professionals don’t seem to hold the noise and climate effects associated with rotorcraft. Still, some organizations and municipalities are leading the way, improving environmental conditions for their human, animal, and plant constituents. Enlisting Rotorcraft in the Climate Fight

Helicopters are often overlooked when it comes to aviation carbon emissions. This shouldn’t be the case. Given how vital rotorcraft are to domestic and international operations, sustainable innovation, mitigation, and tree planting for carbon offsetting initiatives are essential to preventing excessive environmental damage.

Whether you’re a helicopter pilot, rely on rotorcraft for your work, or simply like to take a joyride in a chopper from time to time… calculate your emissions using an ecological footprint calculator now to reduce this sector’s emissions with helicopter carbon offsets and fly green! 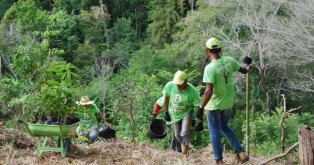 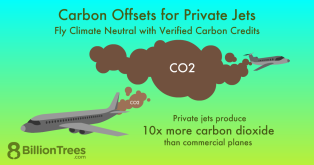 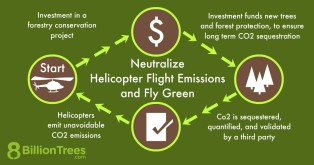