Tesla Model 3 drivers are on the front lines of climate-saving automotive technology. Yet, these cars can’t be 100 percent green without something more.

Because regardless of how green an electric vehicle is, greenhouse gas emissions such as carbon dioxide (CO2) are still generated, either in production or in use (from fossil fuel based energy).

Fortunately, there’s an effective way to calculate the footprint and emissions from manufacturing, which gives all Model 3 drivers the opportunity to be 100 percent carbon neutral.

Keep reading to find out how you can start driving environmental change from the driver’s seat of your car.

What is a Tesla Model 3’s Carbon Footprint?

To truly make a difference and maximize the benefits to the planet by driving an electric vehicle, some actions are needed to offset its carbon dioxide emissions. 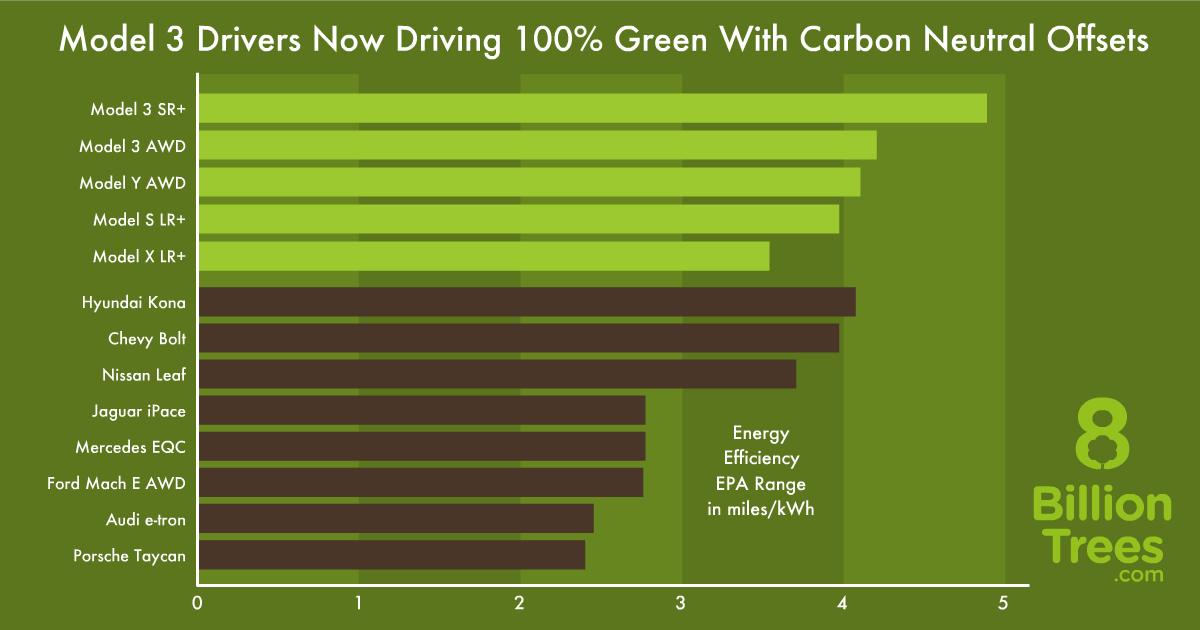 Where Do the Emissions Come From?

EVs’ CO2 emissions are mainly attributed to the manufacturing process and their primary power source: electricity. The cars don’t exactly produce a significant amount of carbon dioxide and other greenhouse gases (GHGs) themselves during use. Yet often, the very electricity that these cars run on thrives on fossil fuels.

According to the U.S. Energy Information Administration, one type of fossil fuel, natural gas, accounted for 40 percent of the country’s generated electricity1 in 2020. Coal produced 19 percent of America’s electrical energy, making it the third-largest energy source in that same year. Petroleum contributed the least amount of generated electricity, accounting for less than 1 percent in total.

Whenever you charge your Tesla from the grid, it pulls from these energy sources. This means that it is still contributing to your CO2 output, despite it being an electric vehicle. Depending on the particular fuels used to generate the grid’s power in that area, your Tesla’s carbon footprint may be more significant than you think.

Plus, despite how innovative Elon Musk (the CEO of Tesla) is, he can’t manufacture Tesla vehicles without energy, particularly the Model 3’s battery. This component has been the point of much contention concerning this company’s true environmental friendliness, in addition to the production process’s greenhouse gas output. The Wall Street Journal stated that a Tesla Model 3 actually produces 65 percent more carbon dioxide emissions2 than the Toyota RAV 4 before it even leaves the factory.

In order to achieve a 100 percent green commuter status, you first need to know the details about your vehicle’s emissions.

The Environmental Impact of Charging a Tesla

Although there are some environmentally concerning aspects of owning a Tesla, there are ways to offset each of these impacts. The National Renewable Energy Laboratory (NREL) evaluated EVs’ energy impact3 —notably, from their charging processes— based on five different electricity grid types that “broadly represent” the various US regions’ carbon dioxide intensity levels:

The NREL found that a battery-operated electric vehicle (BEV) produces about one-third of a conventional vehicle’s (CV) carbon dioxide emissions. Even on high carbon grids, they emit significantly lower levels of CO2.3

The NREL’s study revealed that charging your BEV at work, particularly on low-carbon grids (e.g., using solar energy), could significantly reduce emissions more efficiently than you would when driving a CV.3

Charging your Tesla at your workplace is particularly advantageous, especially when using Level 2 chargers.

EV owners also tend to charge their vehicles multiple times throughout the day while on the clock. This allows them to accumulate more miles without putting more pressure on their home grid during peak hours (typically in the morning and evening).

Carbon Emissions from Driving a Tesla

A vehicle’s fuel economy is a major factor in determining its eco-friendliness. This applies to EVs, too – after all, those electric miles must come from somewhere, right?

For example, here are the hard numbers on what you can expect for a Tesla Model 3 car’s mileage:4

Make sure to note that every 33.7 kWh is equivalent to one gallon of gasoline, which can produce approximately 20 lbs of carbon dioxide.6

Fortunately, even when it’s on the road, your Model 3 generates 66 percent less CO2 emissions than a Toyota RAV4. Once the two vehicles pass the 20,600-mile mark, the Tesla officially becomes more environmentally friendly. Even better, the vehicle’s entire lifetime emissions fall below the RAV4’s.

(Keep in mind that the grid used to charge the Model 3 can positively or negatively influence its relative carbon dioxide efficiency. This study, published in the Wall Street Journal,2 used a national average carbon intensity to factor in grid charging.)

In the end, the research group noted, “No matter what kind of engines they run on, cars add to greenhouse gas emissions.” Smart driving choices can help reduce CO2 emissions, offset your impact, and lead to a carbon neutral future for commuters worldwide.

The best way to improve your vehicle’s CO2 efficiency, specifically while driving, is to alter the way you use your vehicle.

According to the 2019 Tesla Impact Report, the Model 3 is best used as a ridesharing vehicle that is primarily solar-charged versus grid-charged. The company’s report shows that Model 3 cars used for carpooling have negligible emissions7 compared to those used for personal use when solar- or grid-charged.

Plus, qualified EVs can get Clean Air Vehicle stickers for access to HOV carpool lanes, getting you to work much more quickly, while mitigating atmospheric carbon dioxide at the same time. How to Drive 100% Green with Your Tesla Model 3

Earning the “100% Green” stamp with any vehicle is a tall order, but still possible with smart choices. To truly pursue a carbon neutral lifestyle, even these innovative EVs must account for their manufacturing and usage. To achieve true sustainability, calculate your carbon footprint yourself, and see what climate-positive changes you can make.

With an ecological footprint calculator, you can take everything into account concerning your transportation habits. Plus, the data is presented in the context of your geographic region (which is essential in helping you hone in on the type of grid profile you use to charge your Model 3).

With a breakdown reflecting your emissions compared to others, you can determine the precise course of action needed to offset your Tesla’s emissions. One of the most accessible and impactful ways to do so is with carbon offset tree planting. These carbon offset companies take actions that remove CO2 from the atmosphere, so that you can drive your car, and also preserve the planet.

Ready to Be 100% Green in Your Daily Commute?

Becoming carbon neutral is quite a feat, but the goal is within your reach with scientists and carbon offset organizations by your side. Driving 100 percent green becomes even easier when you get the hard data on your carbon footprint as a Tesla Model 3 owner, and start offsetting your emissions.

While electric vehicles are an eco-friendly alternative, Tesla Model 3 vehicles still generate a large carbon footprint during production, and use electricity that comes from a power grid (that normally runs at least partially on fossil fuels). 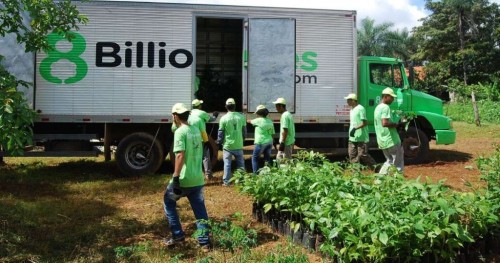