What is an Ecological Footprint? (Don’t Make This #1 Common Mistake) 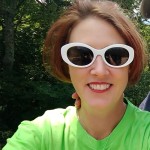 Actually, no. An ecological footprint measures something completely different than a carbon footprint, and the number one mistake people make is assuming they are the same. 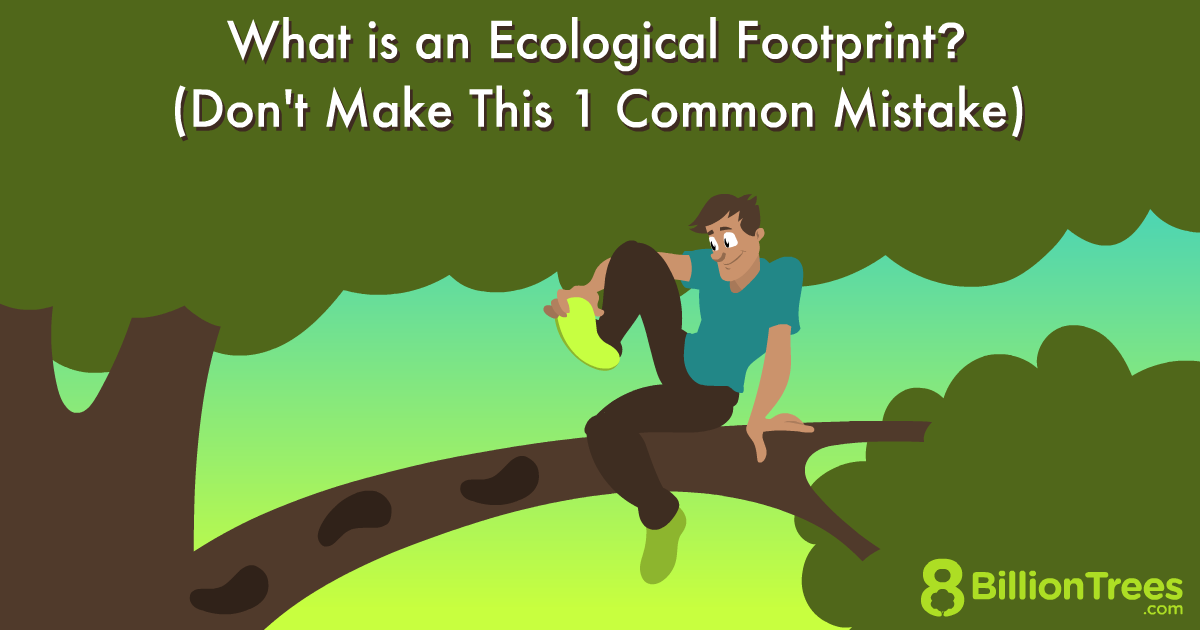 An ecological footprint looks deeply at the continuous demands that humans put on the environment, and the cost of consuming the renewable and non-renewable resources the planet offers. However, a carbon footprint calculates carbon emissions equivalents (CO2e) alone, which include GHGs like Methane.

Don’t worry if the vocabulary seems confusing. The term Ecological Footprint was born first in Canada while Dr. Mathis Wackernagel was completing his dissertation and helping Professor William Reess’ on a project. Both men had a vision to accurately calculate humanity’s global impact and to understand how the earth was coping with the population’s physical demands. They wondered if we were using too much for the land and water to recuperate and how to figure that out.1

So much effort has been put into that idea, since then Wackernagel is now the president of the Global Footprint Network.2 He and his team front a massive effort to let each country and nation know exactly how they are doing on the resource usage scale.

The Global Footprint Network is basically ‘home base’ for the large network of Ecological Footprint calculations that are available to the public. The group diligently works toward making every continent aware of their own impact on the environment and helping develop ecological limits, highlighting sustainability within corporations and communities using important global connections for the future of the planet.2

How to Measure Your Ecological Footprint

Measuring your ecological footprint (EF) takes some work. Many online calculators simply add the carbon emissions from your personal activities and multiply it by a factor related to where you live.

Unfortunately, that’s exactly accurate. Although using that method can be a good way to help educate people on the importance of their EF, to be exact, it requires lots and lots of calculations. In fact, measuring a personal ecological footprint is very difficult. Here’s how it breaks down into its basic parts.

What is an ecological footprint? It’s a matrix measurement of how much land, water and resources an individual (or town, or state, or nation, or the global population) needs to generate the products required for consumption.

In other words it’s everything that’s used to create everything people use, and it usually refers to consumption.

Each footprint is measured in hectares, which is 2.471 acres.2

Breaking down ecological footprints into smaller, more digestible pieces can help explain how many different factors go into this final calculation. An Ecological footprint measures a population’s use of resources and the earth’s capacity to support those needs, this includes what is used and the waste that is left over.3

Planet earth is a continuously evolving biome, driven by the powers of nature, and humanity has single-mindedly altered what nature created over the last century, creating a need for this sort of measurement.

As with anything living, there are limits to what can be taken or used. Biocapacity refers to an uninterrupted supply of natural capital from the environment in relation to estimated demands and consumption.

In other words… the natural resources like lumber, marine life, food bearing plants and other things that can regenerate (or renew) versus how much of these renewable resources that are used.

These values continuously change for every region and include every type of natural resource from land to sea.

Consumption can be defined a few different ways, the first being a casual description of what is being utilized for sustenance, and it can encompass the whole life-cycle of a product (or resource). Basically it is the goods and services required to utilize a resource, including transportation, processing, and use.

Some elements of what defines consumption include:

Negative events can cause a decline in renewable resources and negatively impact an area’s ecological footprint. For example, one year may be warmer and drier than the last, sometimes more people move into an area so consumption rises, and other times the environment changes so much from humanity’s waste it can’t support the same demands.

A good example of this phenomenon is the wildfires in the Amazon rainforest. Wanton destruction of these valuable atmospheric ‘cleaners’ decades ago, reduced the planet’s natural ability to eliminate carbon emissions from the atmosphere. This in turn established changes in weather patterns, which made the area drier and more prone to wildfire. Wildfires then consumed more of the rainforest, and the vicious cycle repeated. The decline in tropical rainforests plays a role in determining the definition of an ecological footprint, because available land and resources are included in the figures.

Because the environmental ecological footprint is impacted by changes around the world, when biologically productive land that was destroyed is rebuilt using native species and indigenous practices, the delicate balance can slowly return to healthy levels.

This type of restoration typically involves planting trees, cleaning rivers or reducing waste.But, it takes time… time that many experts say is quickly running out.

To help efforts, The United States Environmental Protection Agency has information and resources available for communities that have been heavily impacted.

Usually, when talking about EF, people are referring to consumption. But, there are more measurements than just consumption, including:

Both land and sea areas have their own natural ability to absorb waste, and the Energy Ecological footprint is a measure of that ability to absorb CO2.5  All plants absorb carbon and turn it into sugar, water and oxygen (trees do it the best though).

An ecological footprint measurement includes both consumption and restoration, based on land usage matrix calculations.

To accurately measure consumption, there are five land types outlined. Each has its own unique characteristics, issues, and ecological footprint.

The most productive area for producing resources, but there are a lot of unsustainable agricultural practices that have caused long term damage to the soil. Moreover, many fertilization practices can impact water quality through contamination.

Produces lumber, timber products, and pulp for paper and fuel. This footprint is measured by analyzing production and consumption. The carbon absorption footprint is created from this area, under biocapacity, by the amount of carbon dioxide emissions that can be sequestered from the atmosphere with the remaining amount of available trees in a hectare.

This is available land that supports the growth of livestock for products that come from animals.

Since it is difficult to pinpoint the location of wild caught food, this footprint is calculated based on different fish species and their ability to reproduce, and the area is simply divided among continental shelf areas where fishing takes place.

This EF measures the impact of buildings and man made structures that occupy what may have previously been a natural habitat or an agricultural area. Often, built up land displaces agricultural land and forces more natural habitats to be adjusted for new demands from a population being added onto old ones.

EF analysis for a specific city can be calculated by population along with an average number of natural resources used individually. A large portion of a city’s ecological footprint is how much carbon is generated, the larger the city and the higher the population means generally equals higher levels of waste and consumption per capita.2

What happens when the population and the land that is inhabited are out of sync? When humanity’s ecological footprint exceeds the Earth’s biocapacity… when the people on the planet are using more than the planet can restore?

Measuring global ecological footprints using an ecological footprint calculator helps scientists and everyone understand the impact certain activities have on the planet. That way these actions can be regulated to prevent over-consumption or other catastrophic events. For example, consider this cycle of destruction:

Trees have an incredible capacity to regulate the global environment by keeping moisture in the soil under a canopy of tall branches and leaves, ‘breathing’ out moisture to establish “rivers of water” in the atmosphere, and absorbing carbon dioxide, In addition, roots help retain the soil’s moisture and keep it from washing away.

When large areas of forests are cleared away the soil left behind is fertile and packed full of minerals and nutrients, unfortunately the land does not stay that way.7

Once roads are cleared into the forest, farmers move in and claim pieces of land where trees have been removed to grow crops on. The soil has had a long time to compost and become rich.. as a forest. Eventually, without the protection of the tree’s canopy and roots, the top soil is depleted of nutrients and the rain washes it away. The piece of land is now prone to flooding and the farmer is forced to find a new place to grow crops. At this point cattle are normally moved onto the area.

This could be described as a pattern because it happens with almost every forest that isn’t protected and it happens the same way. The Amazon rainforest has the most media because over the years so much has been removed, but it’s not the only one, a lot of tropical forests are affected in the same way and are slowly disappearing.8

Eliminating this sort of destructive cycle is why measuring ecological footprints and knowing what is an ecological footprint is so important. And, although it is time consuming to calculate a personal EF, knowing your carbon footprint can help because it provides details on the areas in your life that can be adjusted to reduce your impact on the planet.

To demonstrate the dire emergency that exists, scientists have established an “overshoot day” to help people understand what is an ecological footprint. This represents the point in time when humans have consumed as much as the earth can produce in a year.

The planet’s biocapacity and humanity’s ecological footprint are divided in global hectares, that number is then multiplied by the days of the year to calculate when Earth has reached its global limit, figuratively.3

Overshoot occurs when consumption exceeds the earth’s ability to restore balance. In fact, the term “earth overshoot day” is used to describe the point at which humans have consumed all the resources available for the year.

These ideas are simple but effective and can be easily incorporated into anyone’s daily life. 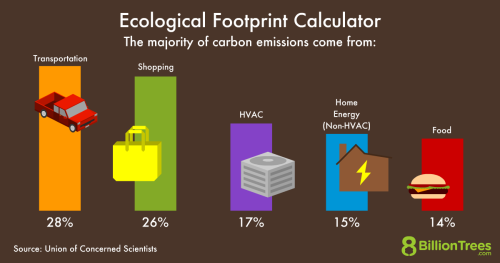 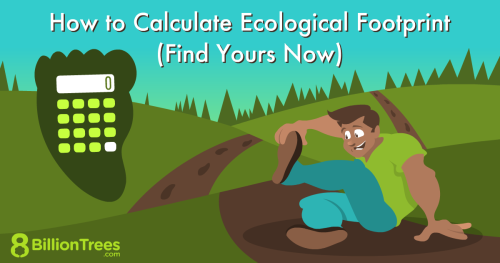