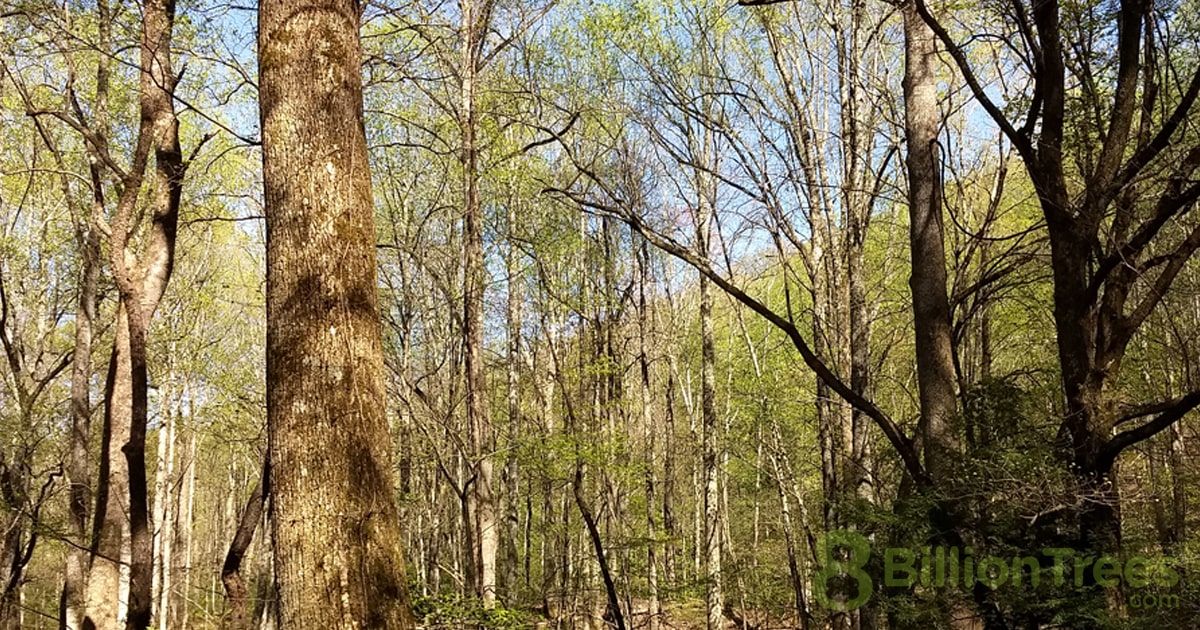 It may surprise you to learn that humankind isn’t the world’s greatest innovator.

Sure, humans have had a great couple of centuries… but humanity has nothing on some ancient tree-dwellers. Animals that live in trees have been doing it successfully for a long, long time. And now, humans are taking the hint and changing how they live with and within the environment.

In fact, some designers and forward-thinking architects are now recognizing how the brilliance of the natural world can be incorporated to make all of our lives better.

And, they’re integrating the way that animals that live in trees and forests to change the way people live in houses in order to help balance the planet’s resources.

As you may know, about 80% of all terrestrial animals live in forests.1 Trees help regulate the environment, provide shelter, provide food, protect from erosion, and so much more. Long ago, our ancestral species lived in harmony with nature and were vital contributors to the ecosystem. In modern times, however, we seem to have lost that sense of balance and become a destructive force. Fortunately, that’s starting to change.

As we attempt to restore balance, we need to look no further than our forests’ roots to find examples of how to live in harmony with the planet.

Although some animals that live in trees also inhabit savannas and grasslands, true arboreal animals spend most of their lives in trees. Sloths may never come down from the rainforest canopy. Their entire lifecycle, from birth to death, happens dozens of meters above the forest floor. In most forest ecosystems, there are even instances of plants growing on plants.

Epiphytes (air plants) such as some species of bromeliads and ferns live suspended among the trees, far from any soil. Some of these epiphytes collect water within their curled leaves. The strawberry poison dart frog lays eggs on the forest floor, but the father frog soon carries the tadpoles to bromeliad pools suspended high among the branches. With food and shelter all around, why would the young frogs ever want to descend from their kingdom in the canopy?

Trees are multidimensional habitats, and animals are quick to take advantage of this. This means that a single tree in a forest has more significance than meets the eye. Beneath the nutrient-rich forest floor, subterranean habitats provide a home for invertebrates, small mammals, reptiles, amphibians, and countless microbes.

And now, humans are starting to apply that logic to dwellings around the world.

Green living is trendy, but it’s not new. Animals have been doing it for millennia (and so have some cultures) and now that idea is being used to inspire energy-efficient building trends.

The Korowai people of Southeast Asia are known as the ‘tree-house people.’ These master craftsmen have built entire houses roughly 10 meters high among the trees of Papua. They say their unique tree houses give them protection from dangers such as jungle predators and rival tribes.

In the twenty-first century, architects and urban planners have sought out ways to bring nature back to the urban environment. With limited space, what better way to do that than covering buildings in lush trees, vines, and flowers? It may sound like a wild idea, but there are numerous economic, social, and environmental benefits.

In fact, the way animals live in trees and adapt to the environment is changing how people live in homes, buildings and structures around the world, making them ‘greener’ by reducing the energy needed for operations. Check out the following examples.

Green roofs are growing in popularity across the globe, but the benefit of ‘forest’ living has long been known to animals.Trees block the sun’s glare and create a cooler temperature for animals, making them a natural choice for homes. But now, working from that inspiration, designers are starting to apply the benefits of forests to buildings!

Flowers, grasses, shrubs, and even many trees are suitable for growing on rooftops. A green roof essentially turns what was once wasted space into much-needed habitat and parkland ‘in the sky.’ These innovative roofs purify rainwater, absorb carbon dioxide and extend the life of the roof itself. 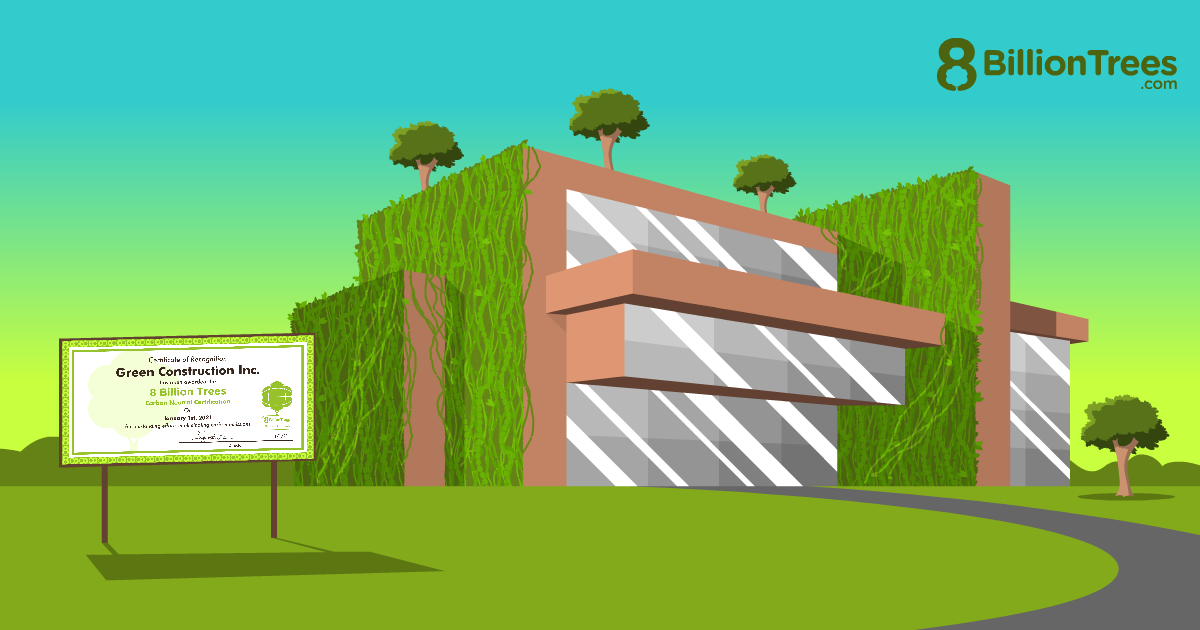 Urban planners have found that green roofs reduce the ‘urban heat island’ effect that warms cities with large numbers of rooftops, parking lots, and roads, which absorb sunlight and radiate heat. Researchers suggest that cities need a 10% increase in greenery to mitigate the urban heat island effect.2 Covering buildings with trees and greenery could be the answer.

In Italy, tree-covered skyscrapers are helping to improve air quality, dampen noise levels and even regulate interior temperatures, saving massively on energy bills. The sides of each building are covered in enough trees to create a two-acre forest, an amazing feat of quite literally ‘green engineering.’

There are also social benefits. Studies have found that the presence of natural areas has a relaxing psychological effect. Increasing urban greenery also helps to reduce blood pressure and resting heart rates. Due to multiple benefits, residential and commercial property values are enhanced when trees are incorporated into urban design.

But long before these innovations took place, animals that live in trees were demonstrating why tree-living and forest-dwelling are so ideal!

Swarm Logic and How to ‘Bee’ Better at Air Conditioning 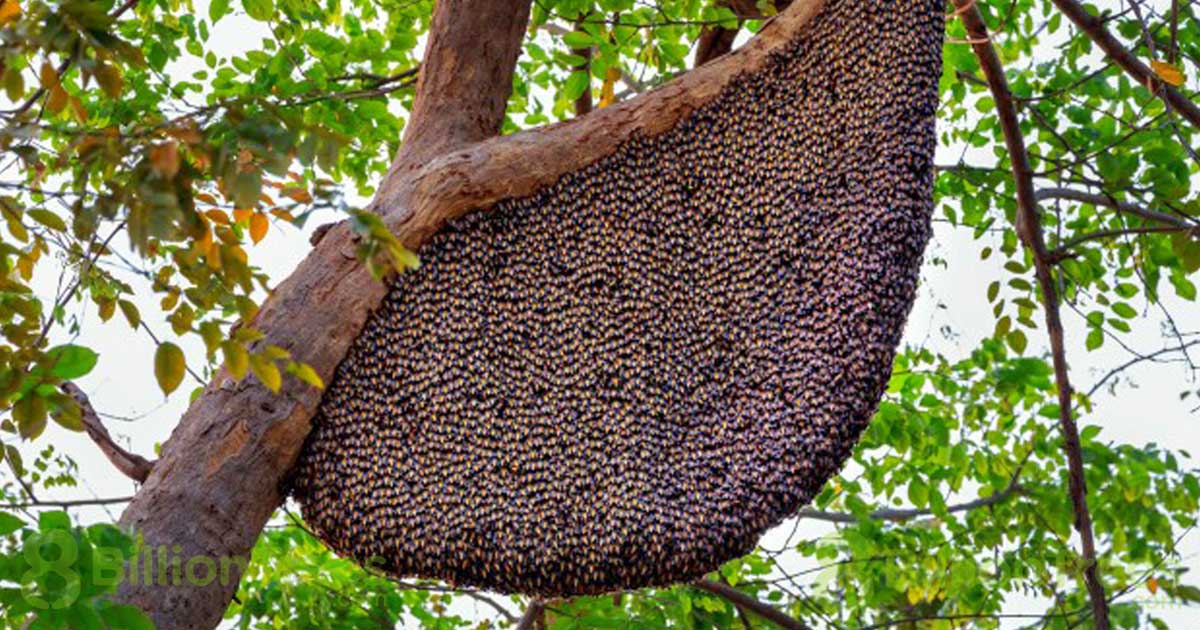 Scientists were long puzzled by how bees knew what job they should be doing despite their small brains and relatively limited intelligence. Then research discovered that bees were able to determine what they should be doing based on where they were in the hive and what other bees around them were doing.

Enter: Swarm Logic. This logic algorithm was developed using this ‘bee’ reasoning model.3 At least one company called Encycle has created the algorithm and has applied it to HVAC systems, but others are following.

Since HVACs typically consume about 30 percent of the electricity of a given building, swarm logic helps ensure greater energy efficiency by concentrating climate controls where they are needed. Basically, empty rooms and other areas not being used are not cooled or heated, saving on energy use.

While this technology is only useful in large complexes and commercial buildings at this time, the savings to the planet are enormous. Encycle’s swarm logic technology typically saves users 10-20 percent in energy consumption, which leads to about a 6 percent reduction in CO2 emissions. 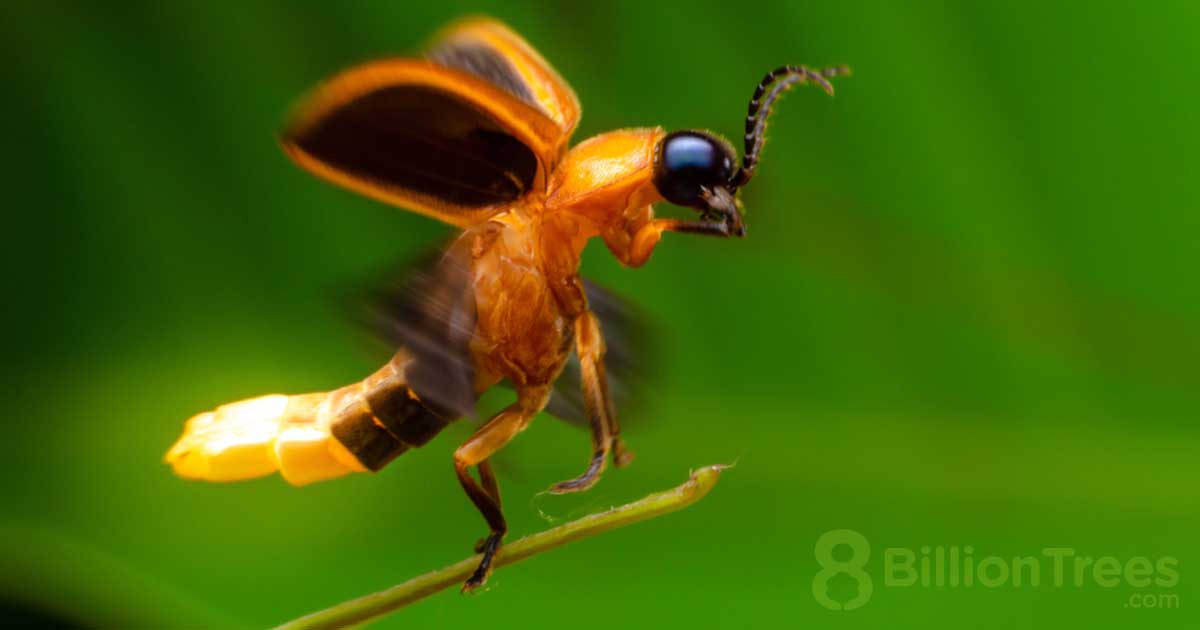 Fireflies, lightning bugs – call them what you want, but they’re definitely cool. If you grew up near forests in the southeastern U.S., you probably have fond childhood memories of running around and catching these glowing insects summer evenings. Afterward, you probably went inside, turned on an incandescent light bulb, and washed your hands.

Incandescent light bulbs are going the way of the dodo and being replaced by newer technologies such as LEDs (Light-emitting diodes). LEDs have been more efficient for years, but firefly-inspired technology is helping take LED efficiency to a whole new level.

Fireflies’ glowing abdomens have special micro-structures called asymmetrical microscopic projections that help release light. Researchers from Penn State found that adding micro-structures to the surface of LEDs,4 which typically have symmetrical projections, helps light escape and increases overall LED efficiency. In fact, in realistic scenarios, the light extraction efficiency of these LEDs can be as high as 90 percent. This increase in efficiency allows us to get the same amount of light from less energy, saving money and CO2 emissions.

In the African rainforest, where temperatures can reach a sweltering 40 °C (104 F), finding ways to keep cool is crucial for survival. Termites have learned that secret and have evolved a plethora of clever design tricks that keep their mounds at near-constant temperatures day and night. 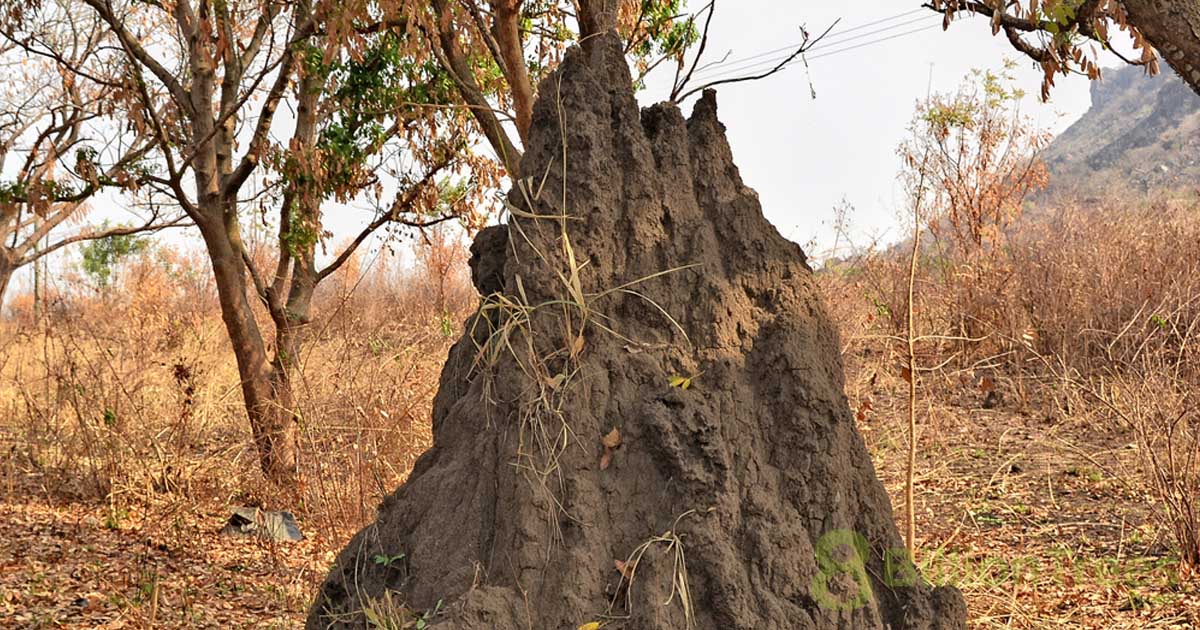 Termite mounds are passively cooled by ingenious systems of vents along the tops and sides. When the wind blows, it sweeps out the hot air from deep within the mounds. Termites can actually control this process like modern air conditioning units by blocking and opening specific tunnels.

Eco-conscious architect Mick Pearce takes a similar approach when designing buildings found in Zimbabwe, Australia, and China. He designed the Eastgate Center – an office complex in Harare, Zimbabwe – so that warm air is vented from a row of chimneys on top of the building while cooler air is drawn up from beneath it.

It’s believed to be the first modern building ever built that regulates its temperature entirely using natural means. The Eastgate Center uses about a tenth of the energy of a comparable traditional building. Mr. Pearce explains how buildings with fossil-fuel-based heating and cooling are environmentally disastrous and outdated in this Science Direct Article,4 and he explains how his biomimicry-based architectural designs work in the video below.

If you’ve never been startled because some hapless bird flew into your window at (what seems like) a million miles per hour, count yourself lucky. It’s not the birds’ fault. There are relatively few “invisible” substances in nature and birds simply aren’t built to process the concept of windows. In fact, according to one study,5 between 100 million and a billion birds die from flying into windows each year.

The problem of having birds randomly fly into your home isn’t an entirely human one, however. Spiders have had this problem for millions of years, and birds do significantly more damage to their homes than they could ever do to ours. Spider silk is amazing – it’s five times stronger than steel, and it’s significantly lighter. Unfortunately for most spiders, that doesn’t matter much when a bird, hundreds of times larger than the ideal prey, comes crashing through its home. 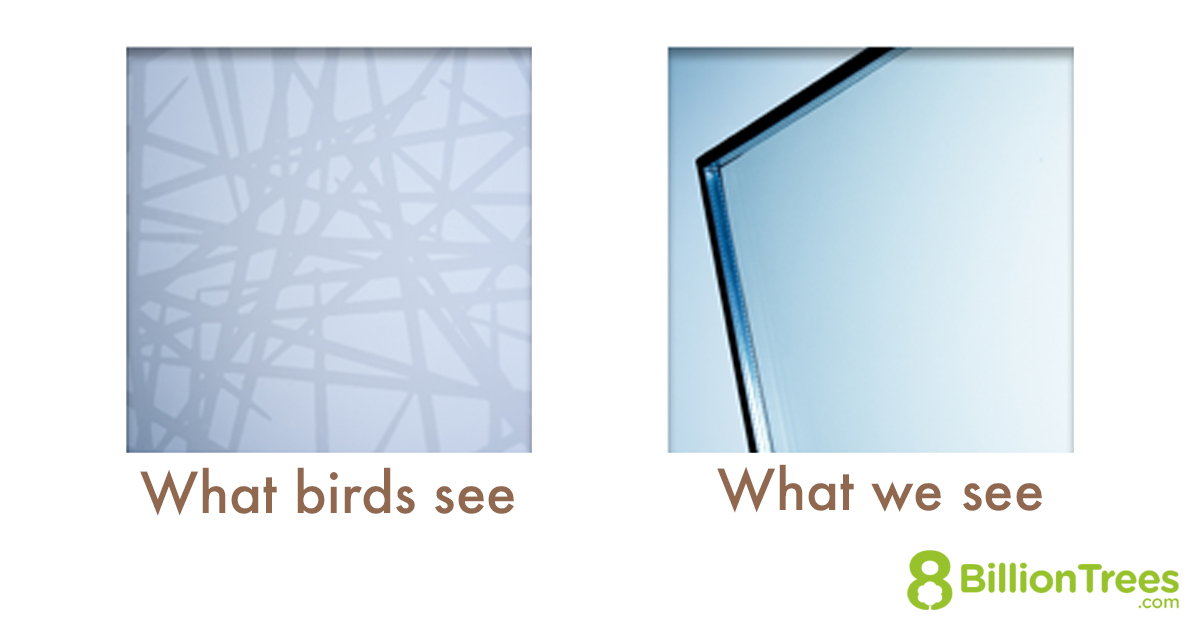 But, if the same web is destroyed by a large animal multiple times, spiders use an interesting trick – they intentionally make their webs easier to see for large animals. There are several ways for them to do this, but one way is by using UV-reflective strands that birds can easily see (it turns out birds don’t like the awkward experience of walking through spiderwebs any more than we do).

AviProTek E is a glass design based on the same general principle.6 This ingenious (and bird saving) idea involves several different designs that can be etched into the outer layer of their windows. The designs are aesthetically pleasing and provide sufficient contrast to disrupt reflections seen by birds, and help prevent them from running into windows.

Additionally, the inner layer of the two-layered windows is coated with SolarBan to limit the amount of heat that’s allowed to penetrate. Neither impacts the window’s transparency, but the resulting system helps minimize the greenhouse effect and allows the owners to use less power on heating and air. And, every dollar not spent on electricity translates into reduced CO2 emissions.

For example, the education center at the Oregon Zoo has AviProTek E-pattern 211 on surface 1, and SolarBan 70XL on surface 2. The result is 64% visible light transmittance, 0.27 solar heat gain coefficient (it limits solar heating), and a threat factor of 23, meaning that 77% of birds that would have collided with the windows without treatment will instead avoid a collision. This meets and exceeds the 70% industry standard.

A similar product is Ornilux which was developed in cooperation with the American Bird Conservatory (the second picture).7 Although humans can see the design if they look carefully enough, it’s generally invisible to us.

Changing the Way We Live

As more and more people realize the dangers facing our planet, living in harmony with nature is becoming the goal. Thankfully, nature has already provided us with countless ingenious examples of how to live responsibly and coexist with the world around us, we just need to pay attention.